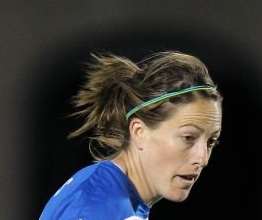 The Pali Blues didn’t have as easy a time with the Quebec City Amiral that many thought they would, but despite a less than average effort, the Blues advanced to the W-League championship game with a 2-0 decision.

The two teams met Friday afternoon at the Algonquin College Soccer Complex in the opening game of the W-League Final Four Championship.

The Blues will now face the Ottawa Fury, who defeated D.C. United Women 1-0, for the W-League title Sunday afternoon.

“I thought that we were on the wrong side of average,” explained Blues coach Charlie Naimo, after watching Liz Bogus score in the 31st minute and again in the 70th minute for the margin of victory.

“We were very lethargic and the movement was bad, but they played us very well. They understood the gamesmanship part of the game so they got into a couple of our players’ heads mentally and frustrated us a little bit.

“I was hoping to have an easier game not only for the fact that we’ve been good all year, but today certainly wasn’t a performance that I’ll remember in a few years.”

Naimo also left leading goal scorer Lynn Williams on the bench for the entire match to give her an extra day to rest before Sunday’s championship and get a little more acclimated with the time difference from Los Angeles to Ottawa, a three-hour swing.

“I wanted to give her an extra day and I was only going to use her in an emergency. I think that injecting some new bodies in the lineup that will help us Sunday, Naimo said.

“Also, when the team reflects on this performance, they’ll be hungry to play a better game.”

Williams had 10 goals in 11 regular season game, but Liz Bogus stepped up in her absence. Bogus was taking down in the first half and after being down for a couple of minutes, she regrouped and within minutes had the Blues’ first marker.

The Amiral kept pace with the Western Conference champions, but a late tally from Bogus seemed to take a little of their breath away.

Anna Picarelli made three saves for the shutout.