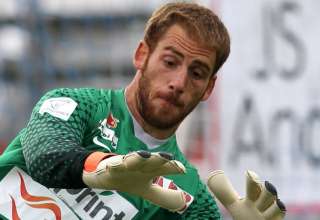 The 11 caught up with Canadian goalkeeper Tomer Chencinski, who has started the last four matches for Swedish Allensvenskan side Orebro SK. The Thornhill, Ont. native has given up four goals in four matches, but enjoyed a 225-minute-plus shutout streak after he replaced Swedish veteran Jonas Sandqvist as the starter, just one game into the season.

Last season, Chencinski enjoyed a breakout season with Finnish side VPS and got the opportunity to trial for Orebro. He was signed and, soon after the season started, looks to have seized the No. 1 role.

The opportunity for you to start came a lot more quickly in Sweden than it did in Finland…
The difference between Finland and here is that the Finnish mentality is that when they decide something, it’s done, it’s the final decision. So when I got to Finland and even though I felt I was showing much better than the other goalkeeper, they told me they had already decided that the other keeper was number one and Tomer, you are coming in as the number two, to challenge. So when I finally got my opportunity, you know, I believe in life that you don’t get many opportunities. And when you do, it’s what you do with them. And I know I’m basically like a pit bull. When I have my chance, it might be my only chance. I’m not going to let go. That’s my philosophy. In Finland, I didn’t want to let it go and here I didn’t want to let it go.

Are you frustrated with Orebro’s poor start? Three points through five matches and at the bottom of the table. (Chencinski started in two 0-0 draws, a 2-2 draw and a 2-0 loss)
We’re doing well as a team, but we’re struggling a little bit in the final third. I feel that defensively we’re doing our job. Look, goals are going to happen, goals are going to go in, it’s part of the game. I’m happy with my defence, we don’t give up many goals, but you need to score goals in order to win games. If one of those ties goes to a win, from us having three points goes to us having five, but it’s early in the season. We have a good squad and results are going to come.

Level of play in the Allensvenskan compared to Finland?
It’s very high. I like it. The play is very quick, especially with us as we are a very possession-oriented team. In terms of Finland of Sweden, honestly, it’s like night and day. It’s quicker, it’s faster, it’s stronger. The players are bigger… the passes are stronger, the shots are harder, the crosses are whipped in much quicker. You just get used to it. You have to get used to it.

Any worry about keeping your job? Jonas Sandqvist is with the club and Orebro has given up four goals in its last two games.
I think that there’s always competition. I don’t think about it like ‘if I give up a goal, is my job in jeopardy?’ The minute that happens there’s a little bit of a problem. The team and the coach have confidence and instill confidence in you as a goalkeeper. You know, mistakes are going to happen, goals are going to be given up, you can’t change the goalkeeper every time there’s mistake. I think I have been showing myself and proving myself that I’m what the team needs and help the team achieve three points… It’s a matter of working hard and fine tuning my game. I still feel I have a lot to learn, but I also feel that I have a lot to offer.

Are you frustrated that you haven’t got a call to the Canadian national side?
I don’t want to say frustrated, because it’s (playing for Canada) different than if that’s my job, like here, if I am not getting my opportunity, maybe that’s frustrating. But, with Canada, if it happens, great. If it doesn’t happen, I’d be disappointed, but life goes on. I would love to have that opportunity, but my main focus right now is with Orebro and doing the best that I can do here. I know if I work hard and give everything and I keep improving and just do what I am good at, that sooner or later the pieces are going to fall into place.

Are you following the Canadian teams? (Chencinski was a back-up to Greg Sutton in Toronto FC’s inaugural season, back in 2007)
I watch the MLS highlights all the time. I see Toronto, I know Toronto is struggling a little bit. Obviously I would love for the Canadian teams to do well. I know Vancouver is doing well, I know Montreal is struggling a little bit, but they’ve picked up a win and a result on the road which is always difficult and it’s difficult for an expansion team. In terms of Edmonton, I have a couple of friends there and I follow them. (In the pre-interview, Chencinski made sure to say pass on greetings to FCE midfielder Dominic Oppong and keeper David Monsalve). I also follow my old (USL) team in Harrisburg and I keep in touch with the guys because I spent some time there. A little piece of me is there. I would love for the Canadian teams do well because it bodes well for Canadian football.

Dominic Oppong, your old Harrisburg teammate, once told me if you gave up soccer you could become an NFL kicker…
(Laughing) Perhaps, I don’t know, we’ll have to see about that! It’s funny, that it’s not the first time someone has told me that. I would say I have a pretty strong foot. I can kick the ball pretty far. It helps with getting a quick counter or it helps with getting the ball down quickly for a one-v-one situation. So, who knows? Maybe after my real football career is over there is an American football career afterwards!