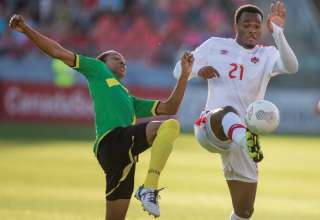 The play of Brampton’s Cyle Larin has kickstarted Orlando City’s season; the team can thanks its Canadian rookie, not its star veterans, for getting its first MLS season into top gear…

For most the players in Major League Soccer who don’t ply their trade in Cascadia, nothing is more intimidating than trips to the Pacific Northwest, particularly Portland.

In early April, with expansion side Orlando City SC struggling to find goals after a difficult first month of life in MLS, Coach Adrian Heath called upon striker Cyle Larin. Five days short of his 20th birthday, Larin delivered a goal that kickstarted the Lions’ inaugural MLS campaign. Larin’s first-half strike against Portland sent the Lions to victory and, since that moment, the first pick in January’s MLS SuperDraft has been a standout performer.

Larin’s strike against the Timbers was a true striker’s goal. Making the right, late run into the area, the Canadian marksman finished with ease. On his first goal for the club, Larin said “It was definitely instinct. As a striker, you have to be able to finish anything with any part of your body. The ball got to me a little quicker than I expected, but I adjusted to it and it went it. It was deliberate, It felt really good. I felt good during the game and I knew it was coming.”

The goal came just 10 days after Larin recorded his first senior national team goal for Canada in a 3-0 win over Puerto Rico.

Larin said after the marker: “It was a long time coming and I had my first chance saved off the line and I was hoping that one had gone in — but I got another chance and it feels good to get back into the rhythm of scoring. I felt good in that game and I felt good about going in and scoring my first goal — and I’m happy I scored my first goal for my country. Scoring gives you a lot of confidence and I think that’s important for me to go back to Orlando with a lot of confidence so I can go and start scoring for them.”

It didn’t take long for Larin’s wish to come true. Larin returned to Orlando and played 68 minutes in a heartbreaking 1-0 loss to D.C. United at the Citrus Bowl. But, that night, it was obvious to this writer that Larin was the best striking option the club had. The Canadian youngster moved brilliantly off the ball, drifting into pockets  of space when needed and forcing two outstanding saves from United keeper Bill Hamid. A week later, Larin would finally have his MLS breakthrough goal in Portland, and he has not stopped scoring since that moment.

Orlando City SC features a mixture of players the club brought up from USL (where the Lions had played the previous four seasons), MLS journeymen, high-profile youngsters and, of course, global icon Kaká. Because of this mix, when Larin was drafted many believed he would have to wait his turn to get significant playing time. Instead, with the Lions misfiring for the first month of the season — despite creating far more chances than the opposition — Larin quickly emerged as the best option for the Lions to finish those opportunities.

Larin’s formative soccer years were spent at Sigma FC, based in Mississauga, Ont. In fact, last year, he played for Sigma’s entry in the birth season of League1 Ontario. But the young player got opportunities to travel and train in Germany and Belgium before he departed in 2013 for a career at the University of Connecticut. His performances at UConn, which included 14 goals in 23 competitive matches led him to be named the Freshman of the Year by Top Drawer Soccer, the U.S.- based website which covers the college game and youth ranks. Larin’s 14 goals placed him fifth nationally in Division I soccer.

Rather than become isolated like so many young forwards do in MLS, Larin lurks in the area and drifts back into midfield to link up in the passing game with the likes of Kaka, Brek Shea and Darwin Ceren. The fluid nature of Larin’s movement — and his tactical understanding of what is required in Coach Heath’s system — have already made him such an indispensable player for the Lions that his name is one of the first on the team sheet for most matches.

That ability to be more than a typical centre forward is something that has also earned the praise of Benito Floro, Canada’s national-team coach.

“Larin is good for us because he’s not only a good striker,” Floro said with the aid of translator. “He collaborates and, because of that, he creates great chances for all.”

Despite a good run of form, Larin did not start an early-June match in Bridgeview, Ill. against the Chicago Fire. I watched the match at a local pub with a number of members of the Ruckus, one of the two major Supporters Groups that backs Orlando City SC; the fans were restless to see Larin — especially with Chicago ahead by a 2-1 count. Heath brought Larin on in minute 66 and, immediately, the game was transformed. The Lions got chance after chance, and Larin finally broke through with an equalizer in minute 84. Just a few minutes later, Chicago conceded an own goal thanks to the pressure caused from a perfectly timed late Larin run into the area.

Larin felt that game was a case-in point about Heath philosophy.

“He told us from the bench (before Larin was subbed in) just get at them, and when we do that, when we have a sense of urgency, we’re able to score.”

Chatting with many of the supporters after the match, they already felt Larin had reached the status of a cult hero and worried about the possibility that a good Gold Cup for Canada might result in the European clubs beginning to sniff around the availability of the player.

That didn’t happen. Larin missed a sitter in the opener against El Salvador, then was subbed at halftime of the loss to Jamaica. In Canada’s must-win game in Toronto againt Costa Rica, he didn’t start.

It was nothing close to the form he had shown in MLS just before the tournament began.

Between early May and late June, when Larin left Florida for Gold Cup duty, the Lions forward had recorded five goals in league play, a remarkable return for an MLS Rookie, especially one who had just celebrated his 20th birthday in April.

Larin’s extraordinary run began on a Friday night in Orlando with the Lions trailing Eastern Conference leading New England 2-0 in the late stages of the match. In the 75th minute, with Orlando looking for a lifeline, Larin made a perfectly timed run that found a Rafael Ramos cross. Larin’s powerful header beat Revolution goalkeeper Bobby Shuttleworth from six yards out and brought a crowd to life that had been hopeful yet inactive for much of the match.

“I was just waiting until my chance in that game. The crowd stayed with us (down 2-0) and I made my run and delivered,” Larin said regarding that goal.

At the time, Orlando hadn’t won a home game in its short MLS existence and, when a late equalizer came, the mood in the stadium was euphoric. That goal began a red-letter nine day period for Larin. Days later at RFK Stadium in front of an American national television audience, the forward opened the scoring early with a great clean-up effort after a deflection. The Lions lost that day, but Larin was clearly finding form. On May 17, in front of over 40,000 fans at the Citrus Bowl and an ESPN audience, Larin turned in a dominant performance in a 4-0 thrashing of the reigning MLS champion, L.A. Galaxy. Larin scored in the first half and was involved in the build-up play to many of the chances that put the Galaxy to the sword.

Following the victory over Galaxy, Heath was effusive in praise for Larin saying: “He works hard. He has all the tools to be really, really good. I said when he scored his first goal that this was the first of many. The way he’s playing at the moment, nothing changes that.”

These early-season MLS performances not only earned Larin a call-up to Canada for World Cup qualifying and Gold Cup squad but have also virtually assured the player of becoming MLS Rookie of the Year. Following in the footsteps of FC Dallas’s Tesho Akindele, Larin would be the second successive Canadian to win the top MLS honour for a rookie.

The sky appears to be the limit for Larin. Young MLS strikers usually don’t have the tactical savvy and ability to find pockets of space that Larin already has developed. The upside is especially good for Canada, a country who has failed to make the final stages of CONCACAF World Cup qualifying since 1997. As the professional game grows in Canada and players like Larin continue to develop and has visible success, one must assume more and more youngsters will ply their trades in elite youth clubs which will help to grow the game to new heights in the nation.

Larin’s MLS success, if combined with strong play for Canada, might give North America’s top division its best Canadian player since Dwayne De Rosario, who is arguably the greatest player in Major League Soccer history. Such is the potential of Larin, who also is likely to attract the interest of European clubs if his stellar play continues.

Describing his opportunity to play at home as “exciting,” and a “dream come true,” Larin laced on his boots for Canada in Toronto on June 12, so close to his hometown of Brampton for a victory over Dominica, where the Orlando City striker found once again himself on the scoresheet. He also scored in the opening match of the two-game World Cup qualifying tie, converting on a converted cricket oval in the tiny Caribbean nation.

With such astounding early returns, Larin seems poised to be a force for club and country for years to come.