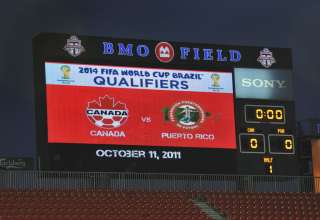 Coming off its biggest offensive output on Friday in St. Lucia, Canada sputtered and fizzled out at home to Puerto Rico on Tuesday night.

Those who watched the World Cup qualifier from Toronto’s BMO Field cannot be faulted for perhaps falling asleep at some point or changing channels during the uneventful and disappointing 0-0 draw. The first half was dreadful to watch and the second half became slightly more exciting as Canada created a handful of chances, but didn’t really test goalkeeper Brandon Saldana.

Canada dominated possession but was unable to penetrate and find any space in the final third. The team kept the ball, playing wide and tried to swing balls in from the flanks but, with Puerto Rico playing nine players behind the ball, the Canadian attack looked listless at best. The team looked slow and cautious until substitute Tosaint Ricketts came on late to add speed and finally added some grit by running at the Puerto Rican defenders.

“I’m extremely disappointed with the fact that we couldn’t score,” said national coach Stephen Hart. “We tried to find the answers they basically waited for us and allowed us to have the ball. At times we were too slow and couldn’t find the answers. And when we did get our opportunities we didn’t take it — everybody saw the game.”

Hart was prepared for the strategy employed by Puerto Rico and he wanted his team to play a more cautious instead of reckless style. The opponents seemed content to play a defensive formation in hopes of getting a break on the counterattack or set piece.

“It was clear they were playing for one chance, either one free kick, one set play or one breakaway opportunity” said Hart.

“So I didn’t want the team to rush things — play the game, keep the ball, try to open them up and see what happens. We created one or two opportunities…but we couldn’t score. We didn’t finish the chances we did have.”

Added forward Josh Simpson, “It was a tight game. I think they knew exactly what they were doing. When they’re celebrating at the final whistle, nil-nil, I think it was pretty clear what they were after. So it’s a difficult situation to play in but I still think we could have done better.”

Late -Game Heroics
Canada did have a great chance in the opening minutes when Dwayne De Rosario sent a cross into Ian Hume but he was unable to connect and missed the ball. Hume would have to leave the game in the 34th minute due to a hamstring injury and was replaced by Olivier Occean.

Canada created more chances in the second half with the first chance coming in the 55th minute when Simeon Jackson found some open space on the right side. He took a pass from De Rosario but did not have a great angle from close range and was stopped by Saldana.

In the 65th minute, De Rosario picked off a poor backpass by Puerto Rican defender Scott Jones, but his shot was stopped by the goalkeeper as the Canadian striker bowled over the goalie with his forward momentum.

Four minutes later defender David Edgar found Ante Jazic open on the right side. His cross was controlled by Jackson but his volley was sent over the goal. Jackson was replaced in the 70th minute by Ricketts who provided some much needed speed in the attack.

In the 77th minute, Ricketts was alone in close but Saldana made a great acrobatic save but the play was called on the offside. Replays showed that he was actually onside and, if the play had continued, De Rosario would have had an empty net to shoot at after collecting the rebound.

Simpson got involved in the attack as well. He intercepted a pass in the 83rd minute and, instead of shooting at goal, he crossed the ball across the six-yard box, but no Canadian player was there to receive it.

Puerto Rico finally got the one chance it was looking for in the 84th minute when Christopher Megaloudis played a ball ahead for Andreas Perez. His sliding shot from in close bounced off the chest of a charging Lars Hirschfeld who came out to cut the angle.

Hirschfeld wasn’t called on very much in the game but he made a game-saving stop when it mattered — one of only two shots on goal for Puerto Rico. If the shot had gone in it would have been difficult for Canada to even the score so late, considering how it had played all game.

Although Canada was not able to score a goal, on the bright side there was some positives to take from the match — and Hart learned a very valuable lesson as well.

“I don’t know what the ball possession was but it was huge on our side,” said Hart. “I think it was a huge lesson to understand that if what you’re doing is not working you have to switch up to something else. If it’s one thing we learned today is that. It’s necessary to have a Plan B, especially with 10 minutes left in the game — they were clearly tired.”

The other bright spot for Hart was the fact that his defence was solid in both matches and were able to hold its opposition off the scoresheet.

“There’s always stuff to work on but that comes with time. But with two clean sheets, we have to be happy with that as a defensive line.”

Canada still leads Group D with 10 points while Puerto Rico improved to three points but has been officially eliminated from World Cup qualifying with two matches to play. Meanwhile, St. Kitts and Nevis tied last place St. Lucia 1-1 and remain four points back of Canada. The two teams will play each other twice to wrap up the second round of qualifiers and only the group winner will advance to the next round. St. Kitts would need to win both games to catch Canada.