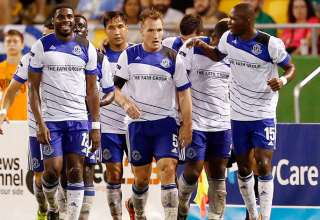 FC Edmonton is through the toughest road trip of their season; a three-games-in-seven days jaunt that took the club out to Florida, back to Texas and then back to Florida.

After beating the owners of the NASL’s best overall record, the Tampa Bay Rowdies, 1-0 on Saturday, the Eddies finished the trip with five out of a possible nine points. They did it with more than half of their regular starters missing. And, four games into the second NASL season, the Eddies are at the top of the fall table.

And, in the overall standings, the Eddies are now just one point out of fourth spot, which represents the final post-season slot. The Indy Eleven plays Ottawa Sunday, so that might change. But, really, you can argue that, with this undefeated start to the fall season (2-0-2, including the 4-0 win over the San Antonio Scorpions in Fort McMurray), the Eddies have pretty well erased any deficits they inherited from a disappointing spring season.

All of this without setting foot in Clarke Field.

In fact, after the win over the Rowdies, FCE coach Colin Miller suggested to the Tampa TV crew that the Eddies might just remain at the top: “We’re going to tick a few people off if we win the fall season.” He even suggested how awesome it would be if Edmonton were to host a wintery Soccer Bowl in November.

He dialled that back when I spoke to him after the match, saying that “nobody at the club is getting carried away” and that “there’s still a lot of work to be done.”

What made Saturday’s win over the Rowdies all the more special was that the Eddies didn’t have one on-field training session between Wednesday’s draw in San Antonio and the kickoff at Al Lang Stadium.

“When we got here all of the grass fields were flooded, you could have taken a canoe across them,” said Miller. So, the team did some fitness work in the gym, but the players didn’t touch a ball.

When the game kicked off, the pitch was about as heavy as a pitch could be without a referee determining a field to unplayable. The ball died in splashes of water. And, in fact, Miller said he was concerned all day Friday and most of Saturday that the game would be postponed.

“I am sure if we would have got any rain during the game, the referee would have stopped it. That’s the thing. it’s a clay surface. It pals fantastic when it’s dry, but, when it’s wet, it’s six to eight inches of sand on top of clay, so it spits the water right back up.”

Interestingly, the slow conditions led to the Eddies’ first big scoring chance of the game. A long ball was played behind the Tampa back four; but it hit the ground and died. That allowed Eddies’ winger Michael Nonni the chance to get around Rowdies’ defender Ben Sweat and run onto the ball. But Tampa Bay keeper Matt Pickens came off the line to make the save.

Really, that was the only significant chance of the first half, as Eddies’ keeper Matt VanOekel had very little to do.

The Eddies took the lead early in the second half. A clever run and cut-back from Nonni set up a shot for Tomas Granitto, whose attempt was blocked. The rebound came out to Smith, whose shot was stopped by Pickes. But, the ball went out for a corner — and, on the ensuing set piece, defender Mallan Roberts headed the ball down towards goal; it hit Pickens, but then bounded off the back of Tampa defender Stefan Antonijevic for an own goal.

That’s the second time on the trip where an FCE shot resulted in an own goal — is it a sign that the Eddies’ luck is turning?

Tampa pushed back, hard. Sweat got in behind the FCE defenders, but his shot was parried away by VanOekel. Rowdies coach Thomas Rongen brought in strikers Georgi Hristov and Maicon Santos. Shortly after the subs were made, the Eddies defenders and VanOekel mae a series of blocks as the Rowdies laid siege to the Edmonton penalty area. And, finally, after a nice low cross from Maicon Santos, Eddies defender Kareem Moses’s last-second intervention prevented Rowdie Robert Hernandez from having a tap-in.

Frank Jonke, back from injury, came on as a sub and had a chance to double the Eddies’ lead, but Pickens came up with the save. But, soon after, the whistle sounded and the Eddies had not only survived, but thrived.

“This is a very good team, a very tough place to play,” said Miller of the Rowdies. “They have spent a lot of money on their roster. And, yes, they had moments where they put us under pressure, but we bent but didn’t break. And, when we had the chance, we put together some passes, as well, and we created chances.”

But he said when the rag-tag MASH crew of Eddies got to Fort Lauderdale, they’d set a goal of five points for the trip.

“They came through, the effort and dedication were phenomenal,” said Miller.