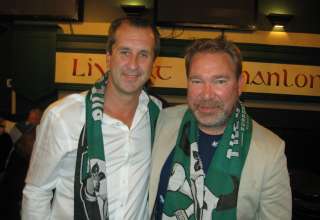 How do you know that you’re at a Canadian Premier League meet-and-greet event with circuit president Paul Beirne and two prospective partners in a Saskatchewan franchise?

When one of the 60 attendees stands up and airs his concerns that the Canadian Premier League schedule could conflict with seeding and harvest.

But, all kidding aside, former-Canadian-youth-national-teamer-now-investment-banker Joe Belan and former Saskatchewan Rush president Lee Genier were on hand Friday at a Regina pub to shed a little bit of light on their plans to launch a CanPL side in either the Queen City or Saskatoon.

Of course, it’s all part of the Soccer Day in Saskatchewan event that goes Saturday, with the NASL’s New York Cosmos meeting Valencia at the New Mosaic Stadium.

But, in this article, I’ll go over some bullet points from today’s meeting.

Beirne said the goal is to have the new Canadian league kicked off a week after the 2018 World Cup final. The league needs to have a minimum of six teams to start.

Saskatchewan is not one of the “first six”

We know Hamilton and Winnipeg have already been approved by the Canadian Soccer Association, and that Halifax has the support of its city council to get a stadium in place. Rumours are swirling about who could be the other three markets in the “first six,” but Beirne said that Saskatchewan “would be seven or eight.”

He said 10 markets are “on the path to readiness” and that there are “lots of moving parts, all moving in the right direction and a lot faster than people realize.”

“Team number seven is the slot we want to have,” said Belan.

Belan said that the team would need to have an 8,500-seat stadium. The plans are that the stadium would be modular — that is, it can be easily expanded — and would take less than a year to build. Still, it wouldn’t be ready for 2018.

“We’re going to start with an 8,500-seat stadium, but we’re going to have to expand it real quick,” said Genier.

Of course, with the support that Regina shows the CFL Roughriders, that’s a feather in that city’s cap. But Saskatoon is larger and, as Belan noted, has a lot of new Canadians who gravitate towards soccer.

And, neither Genier or Belan think that it’s worth trying to go head-to-head with the Roughriders. They say a Saskatchewan team needs to develop its own sporting culture.

But, no matter which city the CanPL team calls home, Beirne had advice residents for the “losing” city.

“Don’t get too attached.”

Belan was enthusiastic about the New Mosaic Stadium, saying that it’s a “world class” facility. As part of building the soccer culture in the province, he thinks that Regina should definitely be in the mix to host a World Cup match in 2026 should the joint United States-Canada-Mexico bid succeed.

“The new stadium really gives me goosebumps,” he said.

It’s no secret that Canada wants to increase its representation in the CONCACAF Champions League. Currently, Canada gets just one spot in the tournament — awarded to the winner of the Voyageurs Cup.

Beirne said that the CanPL is “very supportive” of Canada Soccer’s bid to get more CCL spots, and added he hoped that a second spot would go to the CanPL champ.But he noted that the “CanPL is not alone in the conversation” of what to do with a potential second CCL spot.

It’s no secret that the Canadian refereeing pool is very thin — and many controversies have arisen this year out of NASL and MLS games officiated by Canadians.

So, how does the CanPL hope to improve the standard of officiating?

First off, Beirne said Canadian culture needs to change so that young referees are not being blasted by angry parents and chased out of the game before they can develop. That’s a Canadian problem, not a CanPL problem.

He does not expect CanPL refs to be perfect.

“We expect to have some challenges along the way, no sugar-coating it,” said Beirne. “The expectation is that they are going to make some mistakes.”

But, like players, referees can only improve if they get real game time. So, understanding that the referees are on a learning curve, Beirne expects the CanPL will take a hard line on coaches and players who criticize the refs during the league’s teething period.

Beirne says the CanPL will not be a competitor to MLS for “business or players” at the moment.

“We aspire to compete with them in the long run, but we’re here for a different purpose… at the end of the day, MLS is an American league that happened to invite Canadian teams to join them.”