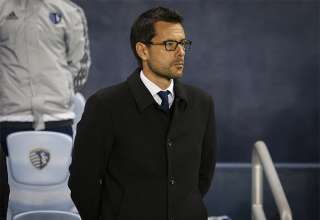 He made it clear that there needs to be a better “connection” between the team’s fans and the players. There’s a magical bond between players and those who buy tickets to see them that we often take for granted. But, to make that relationship work, soccer has to become more than just a game. And so fans need to accept the players as family; they need to know that the team is doing its best to put the best product on the field it can.

“I like people who come to the stands, to the stadium, to have pleasure with what they are seeing,” said Popovic, who was named the Fury’s new head coach on Thursday. “We want to provoke emotion, to connect with our fans.”

Popovic left Swope Park Rangers, the affiliate team of MLS side Sporting Kansas City, so he could make the move to the Fury. Two seasons ago, he was an assistant to Marc Dos Santos at Swope Park, and that year’s edition of the team won the conference and went to the final. Then, after MDS moved on to take over the San Francisco Deltas — who he would lead to a 2017 NASL title —  Popovic led Rangers to another Western Conference title and appearance in the USL final.

“We did very well over the last two years at Swope Park,” said Popovic. “We had a very two good seasons, and get to  four finals and win two titles. After that, you have ambition for more. This is a very good step for my career, I think Ottawa has a very good future ahead.”

Of course, before going to Swope Park, Dos Santos coached the Fury to the NASL final in 2015.  And, with their relationship at Swope Park, there’s no denying the influence of MDS on Popovic.

“Marc has a fantastic brain for soccer,” said Popovic. “For me, he’s the best coach in North America. Of course we talked about Ottawa, he said it was a good situation and a good club.”

It’s amazing that both Dos Santos and Popovic were able to have such success with an affiliated team, where the coach’s roster decisions are often made or at least heavily influenced by the MLS parent club. Being at a club that’s officially independent is a welcome change for Popovic.

“Of course it is different being with a B or an affiliated team,” said Popovic. “When you are with a B team, there is inconsistency in what you have ahead of you. It is like working on ice. You don’t know what to expect. You could be preparing the team for a game and then you find out you’re not going to have five players. Or you could get five players you weren’t expecting to have.”

He said the reason Rangers was so successful was the team’s dedication to a possession game, and look for him to stress that in Ottawa.

“If you followed Swope Park this year, you saw that our success was based on possession and high pressure. We had the best passing accuracy. And that is not by luck, it’s by hard work. And that’s how I want to play.”

And back to the “connection” talk; he said it’s important for Ottawa to have Canadian players, in order to enhance the connection with fans. At Swope Park, he coached the likes of Amer Didic, Tyler Pasher and Mark Anthony Gonzalez, so he’s not coming across the border needing to be sold on the idea of playing Canadians.