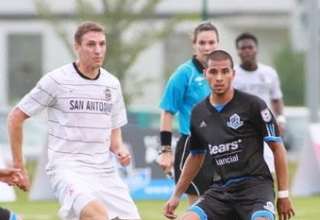 In front of a full house at Clarke Stadium, Yashir Pinto scored the goal that allowed FC Edmonton to draw level with the San Antonio Scorpions. Nearly three hours later, in front of just a handful of fans, he missed the sitter that would have given the Eddies the win.

On bizarre Wednesday night that saw the match halted for two hour and twenty-five minutes because of severe thunderstorms that passed through Edmonton, the Eddies had to be satisfied with a 1-1 draw with the top-of-the-NASL Scorpions, though they will think long and hard about the golden chance that was left begging.

With just 10 minutes to play and San Antonio down to 10 men — and the clock nearing midnight — substitute Shaun Saiko threw in a menacing cross from the right side. The ball fell to Kyle Porter, who shuffled past a defender, and lashed a low drive that Scorpions keeper Darryl Sattler dove to his right to stop. The rebound bounced right to Pinto, who had an open net just a few yards away. But he tried to volley the ball, rather than simply touch the ball into the goal. He got under the ball and skied it over the bar.

“It has to be a goal,” said coach Harry Sinkgraven after the match. “It’s big because we needed those points.”

With the draw, FC Edmonton closes the gap between itself and sixth-place Carolina to seven points. There are eight games left on the schedule, but two of them are against the RailHawks.

Still, the frustration over the missed late chances — Pinto also struck the post from an acute angle after another tantalizing Saiko cross — was obvious.

“That’s been the story of our season,” said right back Antonio Rago, who was back in the starting lineup and was the Eddies’ Man of the Match. “We always are losing games by one or tying games that we should win. Some of it is definitely about us, but a lot of it is bad luck, too.

“That was a game where we needed to take advantage, and we didn’t.”

The game began on a sweltering evening, with the humidity making it feel like it was in the mid-30s C. And the Eddies had to make major adjustments; both of the team’s regular central defenders were unavailable. Paul Hamilton was out with a red-card suspension and Jonathan Joseph-Augustin was nursing a bad hamstring.

So Scottish veteran David Proctor moved from right back to the middle of the defence and midfielder Chris Kooy, as he has done a few times this year, became his partner.

And, early in the match, the Scorpions — led by 15-goal man Pablo Campos — exploited the duo. Keeper Lance Parker was forced to come out and scramble the ball away from Scorpion Josue Soto’s feet after both Kooy and Proctor went to cover Campos on a cross, leaving Soto unmarked.

Proctor and Kooy were both victimized on the opening goal 23 minutes in. Campos had an open header, and simply put the ball into space towards the top of the FC Edmonton penalty area. But Kooy had got caught trying to chase down Campos, and Proctor was caught on the right side. So, no one was at home in the back as Scorpion Jonathan Greenfield ran onto the ball and coolly slotted home.

It could have been much worse for the Eddies, as Parker denied a low Campos drive and the NASL’s top striker also punched a shot just wide after he blew around Proctor to get behind the Eddies’ defence.

The Eddies struggled to get forward. Bryan Arguez, the holding midfielder, was often pinned back with the defenders, wary of Campos’ counterattacks. And he didn’t separate himself from the defenders, even with FCE in attack.

But a series of mistakes from San Antonio allowed FCE to draw level before halftime. After an Eddies’ attack was foiled, Scorpions defender Fabian Kling played the ball forward, but Rago jumped on the ball and one-touched it to Eddie Serisay Barthelemy, who was played onside by a Scorpions backline that didn’t step up when the ball was originally played forward. Barthelemy threaded a pass to the top of the box, and Pinto beat Sattler low and inside the post.

But the clouds moved in at half time, and a spectacular lightning display forced officials to halt the game. After a half-hour delay, the players were brought back up for a warmup, but were sent back after a loud thunderclap rattled the windows in the Clarke Stadium press box. Finally, after a total delay of two hours and 25 minutes, the match continued, in front of a handful of fans who stuck through the deluge — which included members of the Edmonton Supporters Group and a family wearing the Whitecaps and Scorpions jerseys of Wes Knight.

Ironically, Knight was part of the Whitecaps team that saw its 2011 Canadian Championship match against Toronto FC abandoned because of lightning and a heavy downpour that made BMO Field unplayable. And, the official from that night in Toronto, Dave Gantar, was the substitute official for Wednesday’s game in his hometown of Edmonton.

“That was totally new for me,” said Sinkgraven.

“I’ve never been in anything like that, pro or amateur,” said Rago. “In amateur, 10 minutes after lightning, you are going home.”

The Eddies got a second-half break when Soto received two yellows in the space of a few seconds after the home team had been awarded a free kick. At least one of those was for dissent, and Soto kicked over several water bottles after he crossed the sideline.

With the Eddies needing three points, Sinkgraven introduced Saiko, Edmonton’s leading scorer who was benched Saturday. Saiko made an immediate impact, pounding a series of clever crosses into the San Antonio penalty area.

One of them led to Pinto’s chance. And what should have been a brace turned into another night of what ifs for FCE.