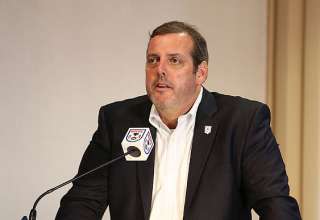 The next step to create a kinder, gentler North American Soccer League was taken on Monday.

The league announced that it and now-former commissioner Bill Peterson had parted ways. A release put out by the league indicated it was an amicable split.

“The last four years have been incredibly exciting and challenging,” said Peterson. “The league and clubs accomplished so much during this time and I am very proud to have been a part of it. I am especially proud of the effort and accomplishments of so many others along the way. There is a lot of work still to be done and now is the time to allow someone else to come in and lead the next phase of development for the NASL. I would like to thank the owners, clubs, coaches, players, sponsors, staff, and fans for all of their support and I wish the NASL much success in the future.”

The NASL will start the season with eight teams and, after much deliberation, the United States Soccer Federation voted late Wednesday to allow the league to keep its Division-2 status. The move likely saved the league, which has seen the number of teams dwindle from 12 in 2016 to eight in 2017, including FC Edmonton.

Throughout the process with the USSF, the NASL took a more conciliatory tone than it had in any other time since Peterson took over. The league openly stated it wanted to work with the soccer authorities and find its place in the pyramid, which is closer to the tone the league had when David Downs was commissioner in 2011. Since Peterson took the reins of power, NASL had ramped up the rebel-league rhetoric, threatening to sue so it could get Division-1 status and compete head-to-head with Major League Soccer.

Another sign of NASL’s new play-ball mentality is the decision from FC Edmonton to sell teenage standout Shamit Shome to MLS; this allows Shome to move up the ladder, and FCE to finally do business with the first division, showcasing its academy as a place that can nurture future top-flight players.