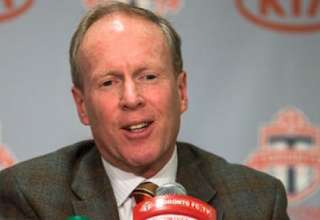 Panic buys very rarely work out in the world of soccer. And Toronto FC president and GM Kevin Payne made the best of a bad situation by dealing Designated Player Eric Hassli to FC Dallas for a conditional second-round pick in the 2014 SuperDraft.

“Eric requested a move for family-related reasons and we committed to him we would make every effort to do so, providing the deal was favourable for the team,” said Payne in a release issued by the club Monday. “We are satisfied with the terms of the trade. If Eric has a productive year for Dallas the consideration paid to us will be greater.

“The most important aspect of this deal is creating salary cap room and a Designated Player spot. We’d like to thank Eric for his contributions to our club and wish him all the best with his new team.”

Hassli scored three times in eight games for Toronto FC, who acquired him in July of 2012 from the Whitecaps. The price? A first-round pick in 2014 — and, if TFC doesn’t make major improvements soon, that could be a very high pick. The Whitecaps also got an international slot from TFC which runs through 2013.

So, through separate regimes, TFC was able to transform a first-round draft pick and an international slot into a conditional second rounder, which might improve if Hassli does very well for Dallas.

This is the price that Payne was forced to pay because the previous boss, Paul Mariner, decided to make a panic buy on Hassli. The French striker scored some awfully pretty Voyageurs’ Cup goals against Toronto FC, and striker Danny Koevermans had just blown his knee.

Even though the Reds were quantum leaps away from being in playoff contention, they bit on Hassli as a solution to the Koevermans problem, even though the price was high and shackled a DP spot that would eventually cost the club a shot at Swedish defender Olof Mellberg. Why any team that far out of playoff contention would add a thirtysomething DP as an emergency measure was a head-scratcher of move, for sure. And, until Monday, Payne was also hamstrung by having three DPs on his roster, none which could be sure would have the fitness to make it through another MLS season.

A second-round conditional pick is OK return in order to take that cap hit off the books — and, let’s be honest, FC Dallas is doing TFC its second major solid in less than a year (the Hoops also took Julian De Guzman’s DP hit off the Reds’ books). But a surefire first-round pick would have been better.