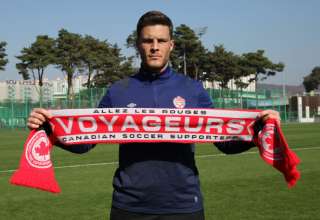 Jayson Leutwiler plays his professional soccer in England. He was born in Switzerland and played for that country’s junior national teams. But, years ago he decided he want to represent Canada at a senior-national-team level. Late in 2016, he finally got his chance to play for the Canadian side.

With Toronto FC minutes away from kicking off its MLS Eastern Conference knockout round game against the Philadelphia Union at the end of October, the Canadian Soccer Association quietly dropped on its Twitter feed that goalkeeper Jayson Leutwiler had opted to suit up for Canada.

With the attention of the Canadian soccer world on what was the beginning of a long playoff run for TFC, the announcement was just a minor part of a full night, but it was the latest in a number of players who had opted to play for Canada rather than spurn the nation’s advances.

For Leutwiler, his first call-up to the national team when Canada concluded 2016 with a friendly in South Korea, was the culmination of a bit of a wait.

“I always had the Canadian citizenship,” the 27-year-old Leutwiler me at the national team’s hotel on the evening of his debut with the Canadian team. Canada lost 2-0 and Leutwiler came in for the second half and didn’t surrender a goal.

“By 22 years old, I got my passport and was hoping then that Canada would call me. It never happened until (this camp) but, by 22, I had the passport. I thought it would be easier to change the associations, to be honest, but that was the time I decided to say ‘OK, I’ll give them a chance if they call.’”

Leutwiler got his Canadian citizenship by virtue of his mother, who was born in Switzerland but lived in London, Ontario, for a number of years.

Born in Neuchatel in the French part of Switzerland, he got his start at a local club before moving onto FC Basel where he worked his way up to become the third-string goalkeeper.

After a number of loan deals, Leutwiler, who stands at six-foot-four, wound up at Middlesbrough in England and, after being released, was offered a spot with Shrewsbury Town in England as the starting goalkeeper. He’s helped guide Shrewsbury up to League One, where it plays today.

Much like Scottish-born Scott Arfield, Leutwiler comes to the Canadian program with a complete lack of experience playing in the hot and humid cauldrons that are synonymous with road games in the CONCACAF region.

Arfield’s first road game was perhaps the most hostile experience in CONCACAF was the trip to San Pedro Sula, Honduras in September. With the heat, the surface and the fantastically boisterous crowd that arrives hours in advance, it’s unlike anything that players who have only experience life in Europe ever get to see. While Leutwiler’s odds of making a debut in that environment are remote, he’s still in for an eye-opening experience.

“I’ve heard them talking about it,” said Leutwiler said of his teammates’ road stories. “The worst game they said was in Mexico or against Jamaica in Houston (at the 2015 Gold Cup). They were saying it’s ridiculous and in the weather, you can’t play. One day I will live that. Korea is OK. The weather is fine. It’s not a big difference but it can happen in any country you can play and there’s a huge temperature difference.

“They can have a huge crowd and it’s a special moment for everyone, I’m sure. Every time you play against countr(ies) like that. Of course, I hope to experience that and if it’s hot, then it’s hot.”

Goalkeeper is one of the few positions where Canada has historically been deep. The 2016 qualifying campaign could have been so much worse for Canada had it not been for Milan Borjan. The 2-1 loss in Honduras in September which effectively all but ended things for Canada’s 2018 World Cup hopes could have been another traumatic experience similar to 2012’s 8-1 loss had it not been for some important Borjan interventions.

With Borjan pretty much locked in at No. 1 and Simon Thomas stepping into the No. 2 spot, forcing Kenny Stamatopoulos down on the depth chart, Leutwiler knows it’s not going to be easy to get minutes in what is a crowded position for Canada.

“I said to a newspaper in Switzerland that I’m going to come here, give 200 per cent and then it’s up to the manager or the federation to decide where they want to put me,” Leutwiler said. “They’ve been talking about how we have 40 players or something like that who can be selected, so it’s not only me. There are other goalkeepers. It can turn at any time so I can just come here and give my best every time and take every camp I can have as an experience to me and to improve myself.”

With Thomas the only other goalkeeper in the November camp that had just the one game against South Korea, each goalkeeper played a half. With Thomas in goal, Canada conceded twice in the first 25 minutes as the Korean virtually monopolized the possession and put Canada under extreme pressure.

Leutwiler’s second half was much less eventful as Canada found its footing and were under much less pressure. There were a few shots from the outside and Leutwiler was sharp when he needed to be.

There is little pressure and even less attention being paid to the men’s national team as it starts yet another World Cup cycle on the back of a previous one that ended far too early.

“When you’re in a qualification for a World Cup or any competition, there’s a lot of pressure,” he said. “You can’t really say you’re going to test something. You have to put a team on the field that’s going to win. I think that’s why it’s great for me. We have no qualification at the moment, but the program over the year is to see what is the best for us.”