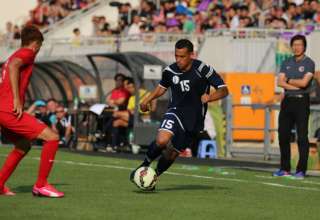 What player in NASL has the most frequent-flyer miles?

There’s a good chance that it’s Shawn Nicklaw. The right back plies his trade for FC Edmonton, a team that, in 2015 and 2016, traveled more than any other North American pro sports team. Later this season, the team will travel from Edmonton to Puerto Rico to San Francisco — a distance of more than 11,000 km — in, get this, six days.

But Nicklaw also represents Guam internationally. Located in the west Pacific, the American territory, like Puerto Rico, participates as an independent nation in FIFA tournaments. But, despite it’s Pacific location, Guam qualifies through Asia, not Oceania.

Nicklaw and his brother, Travis, were both part of the Guam team in the most recent World Cup qualifying cycle. In fact, Shawn set up Travis — who played college soccer at San Diego State University — for a goal in a game against India. They both qualify to play for Guam through their mother.

With a population of just 165,000, you’d expect that Guam would have been out of its depth in qualifying. The island did take it on the chin against Iran, which is an Asian soccer power. But it recorded wins against India and Turkmenistan.

“In the early stages, we were sitting on top of the table in the group stage and we were looking good,” said Nicklaw. “We dropped games that we should have won or could have got a point. We didn’t and it ended up biting us in the butt at the end. It was a heartbreaker but, all in all, we did really well. We showed what a tiny little island can do in a big competition.”

Of course, to most Americans, Iran is a forbidden place. It is a place they hear about through the news. It is a member of what former president George W. Bush famously referred to as the “Axis of Evil.” It is also a nation that is extremely passionate about soccer, and a road game in Tehran’s famed Azadi Stadium is one of the most intimidating trips in the game.

“We had a good atmosphere,” Nicklaw said of the Tehran match. “Due to some complications, there was another qualifier in the city over, I think a couple of the locals went to that game as well. It was still a packed stadium, it was still an intense crowd. On the pitch you really couldn’t hear too much,  it was a great atmosphere and a great experience overall.”

But, he and his Guam teammates knew they had to be careful. After all, Guam is an American territory.

“It was different. Being an American, you kinda felt like you were behind enemy lines. But, our liaison took care of us, it was a good experience overall. We got to learn about the culture, it was an eyeopener, really.

“We got a rundown from our administration on what to expect and the dos and the don’ts and everything. We were well prepared and well mannered and respecting their culture.”