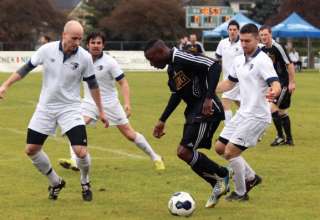 Cowichan FC met the Saanich Fusion in the 2015 final, a rematch of the 2014 championship.

Think Canada doesn’t have a long, storied soccer history? Then best not look to Vancouver Island, where the Jackson Cup has been awarded for a century…

Canadian Soccer competitions are as mayflies. Don’t bother remembering the name of that trophy; it’ll change tomorrow. Ancient awards are those your dad won. In British Columbia, our idea of history is a Major League Soccer franchise pretending it’s 40 years old.

Step down the soccer pyramid, though, and it’s like stepping back in time. Edwardian silver cups go to the car-dealership teams of today. Canadian soccer fans know all about history-by-press release but, for the real thing, come to the west coast.

A British construction firm working a big government contract donated the shallow silver bowl simply, as the trophy says, “for Association Football.” Sir John Jackson may never have set foot on Vancouver Island but his impact surpassed many a life-long resident. The Ogden Point breakwater his company built still stands, largely unmodified, and his trophy remains the marquee prize of the Vancouver Island Soccer League.

The Cup’s history is that of the Island. At first a military character predominates; half the inaugural clubs represented the services. Names like Veterans FC, Sons of England and Canadian Scottish appear on the winners list through the 1970s. With logging and industrial towns up-Island less interested in British pursuits, Greater Victoria teams ran riot. In 1933 the Duncan Native Sons, a team of Aboriginal players, became the first champion from north of the Malahat but, whether through racism, geographic isolation, or carelessness, their name was left off the trophy until 2009. Only in 1991 did mainlanders Powell River Villa become the second winners from outside the Victoria area. Powell River enjoyed more success — and subsequent wins by Nanaimo and Cowichan finished Victoria’s stranglehold for good.

Humble she may be, but the Jackson Cup has drawn some of Canada’s soccer legends. Among the winners were forward George Pakos, the local hero who rose from amateur soccer to the 1986 FIFA World Cup finals, and Canadian Soccer Hall of Famer Brian Robinson, one of the very few Rouges to score at Mexico’s Estadio Azteca. Robinson took his Cups with Victoria Athletics and was Most Valuable Player in 1980. Pakos won the Jackson Cup en route to the 1975 Canadian championship with London Boxing and Athletic Club, launching a decade of Victorian Challenge Cup supremacy. It would seem trite to say Jackson Cup finals before zealous Island crowds prepared Pakos to score World Cup qualifier goals against Honduras, if it wasn’t so clearly true.

Rainy weather was poetically perfect, for Victoria soccer has had much to cry about lately. Founding PCSL club Victoria United folded in October. Then, in January, the United Soccer Leagues’ PDL’s Victoria Highlanders shut down without warning, leaving the Island’s largest soccer program adrift. (Two orphaned  offspring, the Highlanders U-21s and the Mid-Isle Highlanders, played for the U-21 championship; Mid-Isle won handily.) By Cup weekend a “newco” Highlanders in the PCSL had been announced but with only a men’s team. One last much-loved tradition, the University of Victoria’s annual friendly against the Vancouver Whitecaps, ended in humiliation for the locals. It had been a rough few months.

The Jackson Cup, though, was often a ray of sunshine. In 2014, the Saanich Fusion met Cowichan FC in the final. Cowichan, an Island power for half a decade, were champions in 2011 and 2012 while no Saanich team had taken the crown since the ‘30s.

Naturally, Saanich won 2-1, former CIS All-Star and VISL MVP Paddy Nelson burying the winner. Thwarted Cowichan was as high-powered as they came, and revenge seemed in order. In the 2015 semi-finals, Cowichan knocked off strong Vic West while Saanich beat Bays United. The rematch was on. 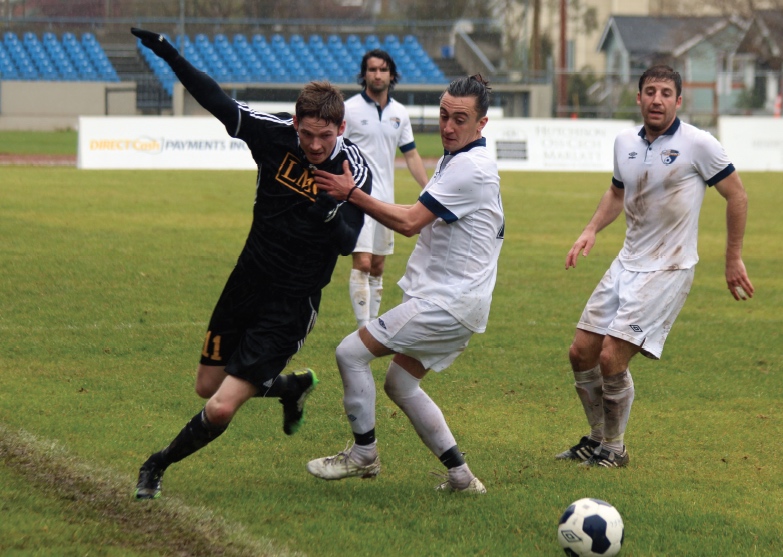 Cowichan traded heavily in former Highlanders. Their final skipper, left back Tyler Hughes, was still a first-rate player at age 34. Teammates included centre back Kevan Brown, a tall, sturdy drink of water, utility player Nelson, drawn from Saanich after his 2014 triumph, and goalkeeper Joel Wilson. Like Nelson, Wilson had starred at the University of Victoria, played for the Highlanders, and was a VISL All-Star. But he was out for the final with a lower-body injury, replaced by the untested Scott Brown.

At the best of times, the grass at Royal Athletic Park is lumpy and inconsistent, never good for technicians. A cool, rainy afternoon was not the best of times. In the great tradition of amateur soccer, both teams left their feet with gusto while the referee took a relaxed view. Slide-tackle paradise, yet the advantage went to the attackers. Defenders went down from six feet out, tried to spear the mud-streaked ball, and tore gashes out of the turf with their spikes as midfielders merrily slipped away.

It’s a two-hour drive to Victoria, but Cowichan’s fans had the better of the packed stand, complete with “We <3 Cowichan” banner. Their team’s early dominance justified all that hope, and when a Hughes free kick turned into an own goal, the favourites went up 1-0. Hughes had played pro in Denmark and the USL, was once a member of the senior Canadian national team, had already won two Jackson Cups, and was the only active player named to the Cup team of the half-century. If all this had diminished his passion for his local trophy, it didn’t show.

So far, all by the script. But as the rain intensified the soccer gods, hungry for drama, flung their lightning bolts. First, Saanich’s Cardin Davis found himself on the end of a minor-attack-suddenly-turned-scoring-chance, tying the match at one. While the hacks were still scribbling, Cowichan responded: Andres Algarin put in a cross that should have been easy pickings for Saanich goalkeeper Josh Menzies, but the treacherous ball slipped through his gloves. On the other end stood Steve Scott. 2-1 to Cowichan at the interval.

Scott, like Hughes, belonged as much to Victoria’s soccer past as its present. A decade after his attention-grabbing 2005 PCSL scoring title, Scott remained the classic target man. Long a fixture in Sooke soccer, Scott played part-time with the Highlanders from 2009 to 2011 and was the last coach in Victoria United’s history. He had won every PCSL trophy and the John F. Kennedy Memorial Cup, but never the Jackson: Scott joined Cowichan just in time for the 2014 loss to Saanich, but had started his third Jackson Cup final on the right foot.

The rain kept coming during a lengthy halftime ceremony and, when play resumed, the grass was even more foul. Cowichan keeper Brown struggled to keep his footing and nearly conceded when he twice slipped reaching a wide ball. Nelson completely blew a tire in possession; going down, he swung his leg wildly at the onrushing Fusion defender and was lucky to avoid red.

Some rose to the occasion. Saanich midfielder Andrew Celenza braved the elements full tilt and hassled every Cowichan possession between the 18-yard boxes. Slowly the game turned for the Fusion, but the equalizer was elusive. Brown made good saves and Cooper Barry helped, clearing a Saanich header off the line.

The game ground gradually to muddy equality, Cowichan reinforced its lead with every agricultural challenge. Saanich generated little offence late until, in added time, a corner. The looping cross got through Cowichan onto the head of centre back Chris Peereboom, who couldn’t miss. The Saanich fans exploded but their excitement was nothing to Peereboom’s, who ran, stumbled, and slid to the touchline, arms pumping in no particular rhythm, teammates deliriously mobbing him. With the clock on 90 minutes, extra time beckoned.

The chilly fans would enjoy 30 minutes of free soccer. Cowichan, on the other hand, looked irritated. Its first attacks in extra time were nearly overwhelming. Menzies barely tipped a Scott free kick over the bar. Not long into the second 15, Cowichan finally struck home. Having saved a goal earlier, Barry unleashed a speculative shot from over 40 yards that took a deflection and swerved past Menzies. 3-2 to Cowichan and surely the valley veterans had the Cup they’d been denied in 2014.

Maybe, but not yet. This was an afternoon for unlikely heroes.

Both teams were spent, mistakes piling up. With only minutes left Saanich had a throw-in deep in Cowichan territory, the centre backs came forward, the throw went long. Peereboom rose to the ball and caught only a glancing header, but the ball dropped and squeezed through Scott Brown. This time Peereboom’s celebration was more subdued; he’d been there before.

Cliché though it is, the Cup would belong to the team with the most guts. The substitutions were gone, the players were wrecks. Cowichan attacked like zombies, drew a corner. Hughes’s effort was a bouncer but it slipped to Nelson, who worked into the centre with his back to goal. The ex-Saanich man put up a short-range cross and it found the red hair of Cowichan centreback Kevan Brown. It was the 122nd minute, and Cowichan had taken a 4-3 lead with the third goal of extra time. 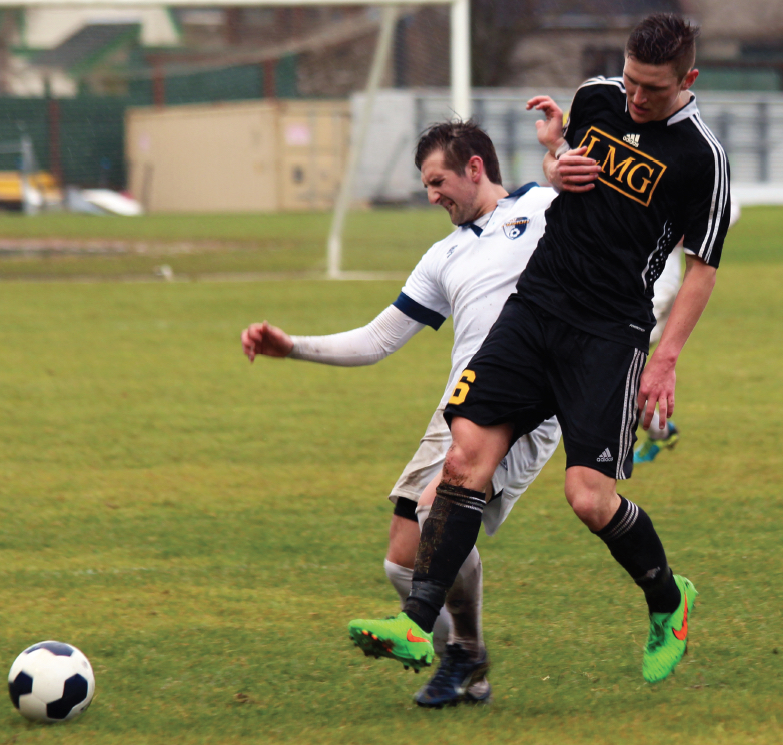 In the dying heartbeats, Saanich rolled the dice once more. A free kick was partially deflected by Cowichan but the ball fell to the foot of the on-rushing Peereboom, who slashed a shot inches wide of the most glorious of hat tricks. The final whistle blew, and Saanich’s players collapsed. Cowichan’s were almost more relieved than happy, one off the bench shouting to his teammates. “Don’t do that to me again! Don’t ever do that to me again!” A 4-3 Cowichan win in the best-attended, and maybe the best, VISL game anybody could remember.

Another cliché: it was a team effort. As VISL president Vince Greco waited to present the trophy, the Cowichan players discussed who would go get it. The honour went by acclamation:

Saanich’s Peereboom was named Jackson Cup MVP; an unusual distinction for a central defender whose team conceded four goals, but the Fusion had earned some recognition. Limping visibly, injured Cowichan goalkeeper Wilson herded his teammates and their trophy to the “We <3 Cowichan” banner.

The players caught their breath through wide grins and posed with children and outstretched index fingers, Wilson kneeling proud in the centre.

As the crowd parted, Wilson called to his teammates “now help me so I can stand up.”

But, after two hours in the rain and mud to win the greatest battle for Vancouver Island’s oldest trophy, his teammates probably weren’t standing so easily either. Never had a humble crown been more gallantly earned.