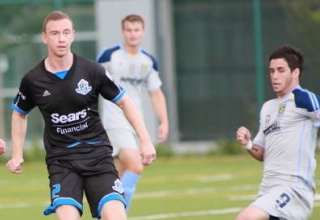 A Shaun Saiko-less FC Edmonton got the luckiest of bounces to salvage a 1-1 draw with the Minnesota Stars Saturday night at Clarke Stadium.

With lightning flashing in the distance and a rainbow to the east of the stadium, the Eddies got a stroke of luck just minutes before the end. Trailing 1-0, midfielder Bryan Arguez threaded a ball through to substitute Michael Cox. Cox got a low shot on goal, that Stars keeper Matt Van Oekel got down to stop. But the rebound caromed off the shin of defender Ernest Tchoupe, and bounded across the goal line.

It was fortunate for an FC Edmonton team that did little to trouble Van Oekel for most of the night. A timid left-footed shot from Serisay Barthelemy, that was hit right at the keeper, was the best chance the Eddies had before the own goal.

Barthelemy took Saiko’s spot as the attacker playing right behind the two strikers. Coach Harry Sinkgraven made the decision to sit the hometown star and leading scorer (with five) for the team’s only match broadcast on CBC television.

Sinkgraven defended his decision, saying that from what he saw in training, he felt Saiko had lost his spot in the lineup.

“The decision was that we wanted to play some other players,” said Sinkgraven, who received a contract extension that takes him through the 2013 season.

And Sinkgraven angered striker Yashir Pinto, who threw a water bottle in disgust after he was taken off in the second half. The sub came right after fellow striker Paul Craig stared down his partner, after Pinto looked to have given up on a 50-50 ball. The ball went to Craig, who threaded a ball back to the top of the box where Pinto should have been. But the Chilean had his back to the play.

FCE started off the match well enough, getting balls into wide spaces. Proctor had some decent runs down the right, and linked well with Craig, who pulled to the outside while Pinto tried to be the target man. But, outside of the Barthelemy scuffed shot, FCE Edmonton did little in the box despite long spells of possession.

But the game was physical. On a 50-50 ball, Stars midfielder Kevin Venegas absolutely flattened FCE defender Jonathan-Joseph Augustin, who skidded to the ground and was down for a few minutes. No foul was called.

Right after Augustin came back in the match, a long ball was played towards the back, and Augustin got caught turning the wrong way. He then tried to kick out at the ball to clear it away, but missed. That left Stars’ midfielder Martin Nunez the chance to stroll in alone on FCE keeper Lance Parker, and he finished with a shot to the top corner to give the NASL champs the lead.

“We make one mistake in the back, and it will kill us,” said Sinkgraven.

Instead of coming out firing in the second half, FCE’s game slipped, and Minnesota had the better of the chances. Proctor’s perfect last-ditch sliding challenge in the box foiled Simone Bracalello.

Parker then made two very good saves: One on a header from Geison Moura, and a diving stop on a low drive from Venegas.

Those interventions are what allowed the Eddies to hang in the game.

But, right before the end, Eddies’ central defender Paul Hamilton was sent off after a clash of heads with Moura. The Stars player was stretchered off. Moura got to the ball first and, while not malicious, Hamilton was late and got Moura in the back of the head.