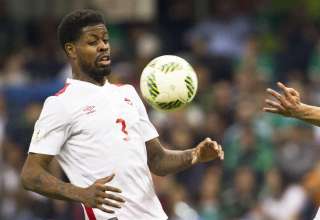 Less than a week after a makeshift Canadian men’s national side beat Mauritania 4-0, the second half of their African adventure saw them lose 4-0 to Morocco.

The home crowd in Marrakech likely enjoyed long periods of the friendly where the home side toyed with the Canadians. Without the likes of Atiba Hutchinson, Will Johnson, Nik Ledgerwood or Junior Hoilett — who left camp so he could work on a deal with Cardiff City — the Canadians were overwhelmed in the midfield. Ajax’s Hakim Zayich buzzed through the middle of the park, darting in and around Canadian markers who looked as if their soccer cleats had been dipped in lead.

And, for central defenders Manjrekar James and David Edgar — well, safe to say they have seen better days.

Morocco opened the scoring in the first half when left back Hamza Mendyl found acres of space on the wing and sent a cross into the box. Both Edgar and James tried to head the ball away. They both missed. The ball fell to Mehdi Carcela-Gonzalez, who tucked the ball into the corner of the goal.

But the Edgar-James odyssey was far from done.

In the second half, Edgar leapt to clear a ball from his own penalty area — problem is, his elbow connected with the head of Youssef En-Nesyri, and the referee pointed to the spot. Zayich stepped up and chipped his penalty shot, beating Canadian keeper Milan Borjan.

Canada then got a chance for a 73rd-minute consolation. Jonathan Osorio found himself unmarked in front of goal, but his shot was beaten away by keeper Yassine Bounou. The Moroccan keeper was called into action again four minutes later, as he leapt to redirect a shot from Marco Bustos — who had come on as a sub.

In what was a mercy hook, Canadian coach Michael Findlay replaced Milan Borjan in goal with Simon Thomas. The Canadian defenders decided to give Thomas some work by getting caught flat-footed by a simple through ball — and Aziz Bouhaddouz went on a breakaway. But Thomas did well to come off his line and stop it.

But a third goal was coming, and it was James who made it oh so easy. His own heavy touch in the penalty area presented the ball to Bouhaddouz, and James hacked him down. Ziyach converted his second penalty of the game — and neither of them were controversial in any way.

To finish the day, Rachid Alioui’s volley deflected off of Edgar’s gut and into the Canadian net to make it 4-0. It was a final insult in an evening filled with injury.