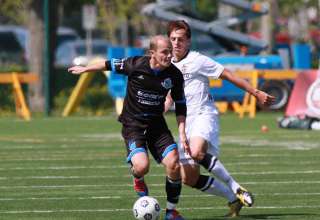 FC Edmonton will soon find out just how long import midfielder Ilja Van Leerdam will be out as he struggles with a knee problem.

Van Leerdam was out of training last week and didn’t go on the road trip which saw Edmonton beat Atlanta Saturday and travel to Tampa for a date this weekend against the Rowdies. The team has confirmed that the Dutch midfielder, who signed with the team in the middle of the 2011 season, has an upcoming doctor’s appointment to determine how long the knee injury will keep him off the field.

Van Leerdam was subbed off in the 60th minute of FCE’s 1-0 home loss to the Tampa Bay Rowdies back on July 15, and hasn’t seen action since. If last week was any indication, Van Leerdam’s absence will be filled by Chris Kooy moving back into the midfield, and Paul Hamilton resuming his role in central defence, with on-loan Bryan Arguez and Kenny Caceros also in the middle of the park.

Van Leerdam has scored once this season, and has three assists, which places him second on the team in that category (Shaun Saiko leads in both goals and assists with five of each).

Van Leerdam is third on FC Edmonton this season in terms of minutes played, at 1245.