December 06, 2022
9 New Articles
Home Global Game CONCACAF Ottawa Fury not backing down, but will players, agents take chances on a team with an uncertain future? 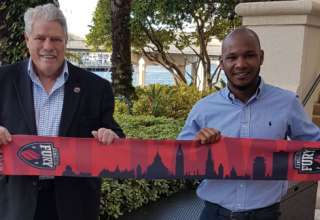 The Ottawa Fury is putting on a very brave front. The team has got notice that an application to play in USL for 2019 won’t be approved by CONCACAF.

Still, on Friday, the USL released its home-opener schedule — and there was the Fury, to open at home April 6 against Nashville. Mark Goudie, president of the Ottawa Sports and Entertainment Group, says that it’s still full steam ahead for the new season. Go to the Fury’s website, and you can still buy season tickets.

But the clock is ticking.

The team currently has 10 players on its roster. It says that there will be more signings to come. But, here’s the question: if you’re a player or agent, do you sign the contract with the Fury’s position up in the air? Or do you hold off and wait to see how things play out, and entertain other offers in the meantime?

So far, what I am hearing from agents and players is that they’d hold off. And this is where it gets tricky for the Fury. In January, we’re going to see a surge in signings in both USL and the Canadian Premier League. And, with each day the Fury has to sit on the sidelines and not be active in the market, the team’s chances of having a competitive roster dwindles.

One agent put it bluntly: “Of course, I would caution against signing there —  especially if my client had other options — until it is known what will occur.”

Another agent admitted to being taken by surprise by the whole sanctioning issue. “I suspect it get resolved, but I’ll be looking for other options soon if not.”

But another consultant, agent and manager said he wasn’t surprised — and his perception is the Fury would have known at some point a sanctioning body was going to step in and force them away from a U.S. based league; the question was when this was going to happen.

He says, though, that if CONCACAF wants the Fury out of USL, it should separate all Canadian teams out of that league’s ladder, whether it be the top tier, its new Division-3 entity or the PDL. In his mind, if Ottawa is pushed out, so should TFCII, Thunder Bay, Foothills FC, TSS FC Rovers, Victoria Highlanders and WSA Winnipeg.

“If you ban one  team, you ban ALL Canadian teams,” he says.

Time not on their side

Let’s say that some kind of agreement to keep the Fury in the USL can be made; the longer it takes, the better the chance the Fury can’t put together a roster to compete in the league’s Eastern Conference. You could have a situation where the team enters the season with a roster that’s put together with Band-Aids. So, even if the team plays, the damage is done if the losses pile up.

And if the team doesn’t play, if OSEG has to shut off the lights, the players walk away, correct? Well, it might not be that easy, says an agent.

He says his position is that  “any contract signed —or soon to be signed— would require OSEG to be liable for full payment.”  If he had a client who had put pen to ink on a deal, he and the player would then search elsewhere if the Fury went dark; but, in the agent’s mind, OSEG would be liable for any difference plus damages. Why? Because the club pledged it would field a USL team, and did not do so.

Basically, it’s like this; the agent’s opinion is that if the Fury was offering contracts before the sanctioning was complete, it’s OSEG’s risk.

Of course, that gets back to the issue of how long the Fury could expect to wait before it had to start the signing process, or else run the risk of being forced to settle for a roster that had last place written all over it. Remember that CONCACAF didn’t reject the Fury’s application; the regional body warned it would not approve the application once it got there. The actual application wasn’t on CONCACAF’s desk, yet. So, that gives an idea of how long the sanctioning process takes. Is it fair to ask the Fury to not sign players in the meantime? Really, right from the beginning the club was caught between a rock and a hard place.

If the goal is to make the Ottawa Fury compliant with FIFA rules, what about other FIFA rules that North American leagues may not be following to the letter?

If there’s a way to describe what I’m hearing, I’d use the 2012 Olympic women’s soccer semifinal as the analogy. Think back to the game; Canadians were befuddled when the game turned on a six-second call. Canadian keeper Erin McLeod was called for holding the ball for six seconds, and the resulting free kick led to the American equalizer. The Americans eventually won the game.

Canadians weren’t outraged that referee Christina Pedersen made a wrong call; the six-second rule exists, no doubt about it. No, what they were angry about is that the referee decided to enforce a rule that, in the day-to-day world of international soccer, is never enforced. In the minds of Canadians, Pedersen picked her spot.

Likewise with CONCACAF. Agents have told me there are many FIFA mandates which are flouted by North American leagues, from issues in contract paperwork to team options on players. CONCACAF hasn’t demanded that American youth teams be paid solidarity money.