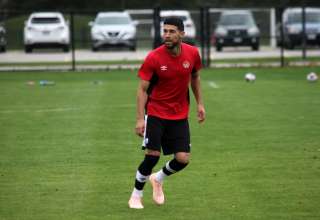 In the sports media business, you hear this a lot.

“We have to focus on what we do, not what they do” or “we have take care of our own game, and not worry about them.”

And, almost every time, it isn’t true. If teams truly didn’t worry about opposition game plans, they wouldn’t be scrutinizing video and using advance scouts.

But, when it comes to Canada and the CONCACAF Nations League, the “we have to focus on us” mantra is, well, true. Canada will play Dominica at BMO Field on Tuesday, its second match of four in Nations League qualifying. This qualifying schedule brings together Canada with a lot of smaller Central American programs and teams from across the Caribbean, nations that don’t get a lot of attention, at least when it comes to soccer. Heck, many of these teams don’t generate a lot of attention in their own countries.

So, even though Canada played Dominica in the most recent World Cup qualifying cycle, Canadian midfielder Jonathan Osorio admitted that he and his teammates have what amounts to a very limited scouting report on the team from the island nation.

He said that, the last time they played, Dominica liked to play a direct style. Dominica’s players were athletic, and the rest, well, it’ll take care of itself Tuesday, right?

“It’s difficult, you don’t really know what you’re up against,” said Osorio.

“It’s interesting playing them because you don’t know much about them… and it’s hard to get video on them.”

So Canada focuses on its own game because, well, in a lot of ways, the Nations League qualifiers see them facing minnows from the unknown. Canada throttled the US Virgin Islands by an 8-0 count in the opener.

But Canada needed the goals then, as they will now. To finish at or near the top of the group, a team not only likely has to win all four games, but amass a healthy goal difference.  Curacao’s already at +15 over two games. Cuba is at +13. Haiti has played just once, but is at +13. Jamaica has played twice and is at +10.

Osorio said needing to pile on the goals isn’t a bad thing.

“It makes us play 90-minute games,” he said. “In the past, when goal difference didn’t matter, you got up four or five goals on a team and cruised till the end.”

And while the goal differences for some of Canada’s rivals were posted a couple of paragraphs ago, Osorio said he and his teammates aren’t yet looking at what’s happening outside of the game with Dominica.

“I haven’t been looking at the scoreboard, I honestly can’t tell what’s happened in the other games,” said Osorio.

Checking the scores will come after Canada’s game, to see where the team’s performance on Tuesday has left it in the standings. But, until then, no one needs to know about another country’s +15.

Unless it’s the weather.