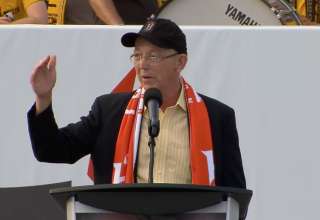 The Canadian Premier League now officially has the same number of teams committed for the 2019 season as the National Hockey League did for two and a half decades.

Of course, while Hamilton’s entry was the sixth team to officially be launched, it will remain as team No. 1 for most who follow the CanPL, as the league’s genesis can be traced back to Hamilton Tiger-Cats owner Bob Young and team president Scott Mitchell. It was the Ticats management who brought in CanPL president Paul Beirne to help build the league and recruit support from across the country.

Hamilton Mayor Fred Eisenberger said that an agreement to have Forge FC play at Tim Hortons Field should be finalized on Friday.

“In 2019 we will launch eight teams, but we’re talking to 16 other communities and potential owners. Soccer is on fire in Canada.” CanPL Commissioner David Clanachan said.

Young said that the Forge name honours the city’s past as a heavy-industry centre, and that the city is “forging” a new identity as an arts and tech hub.

The team will wear orange, silver and white. The colours of fire, steel and water. But, once a season,  the team will wear a special black and gold kit to honour the city’s traditional sporting colours.

“This has been a six-year project, this is why we’re so excited,” said Young, officially listed as the co-founder of Forge FC.

Young said that, without Mitchell, neither the league nor Forge FC would have been possible.

“The future is ours, the opportunity is massive,” said Young,. “I love businesses that are at the front of the parade… I may have had a hand in starting this, as did Scott, as did David, but I am just the co-founder. I am going to need help… I think we have something like 2,200 other co-founders tonight.

“We have the opportunity in Hamilton to build one of the flagship teams, if not the flagship, of the Canadian Premier League.”

John McGrane will be the vice-chairman of the club.