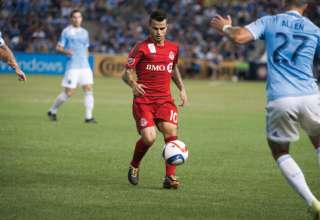 Sebastian Giovinco is having a season for the ages; not just in Toronto FC terms, but in MLS terms. But, as his team looks set to back into the Eastern Conference playoffs, the question remains: Can the Atomic Ant’s astounding offensive contributions compensate for a defence that’s been astoundingly inept?

Mathematically, the odds are very much in Toronto FC’s favour to reach the playoffs. The Reds have about as many points separating them from first place in the Eastern Conference as they do from seventh. With so many matches remaining at BMO Field, it would take quite an avalanche of misfortune to stop Toronto now.

OK, you can’t blame TFC supporters for not counting their chickens. Given how this club has been buried by more than a few of those avalanches over eight seasons of postseason-free soccer, the fanbase won’t be comfortable until the “clinched” star is finally next to Toronto FC’s name in the league table.

While a late collapse is statistically unlikely, it can’t be discounted, given that TFC isn’t exactly roaring down the stretch. The Reds posted a 4-7-2 record over 13 matches from July 4 to Sept. 16 and allowed a whopping 30 goals over that span, looking all the while like a club whose patchwork defensive core had finally burst apart. Coach Greg Vanney has been shuffling and reshuffling his defensive lineups in the wake of injuries, international absences, suspensions and some players simply not playing up to par. One bright spot has been Ashtone Morgan, as the Canada international revived his TFC career with some solid work opposite Justin Morrow at fullback before injuries curtailed Morgan’s playing time.

New signing Josh Williams has also immediately become a fixture at centre back, something of an unusual circumstance since Williams is a fullback playing out of position. The MLS veteran had some central experience, however, and Vanney felt Williams could help Toronto in the middle after watching video of Williams’s performance as a CB while teamed with Chad Marshall in Columbus.

“If they need to play right back or stay at centre back, I’m fine with it. Like I told Greg, as long as I’m on the field I’ll play anywhere,” Williams says. “Stability is focusing on the details… If you  look at our back line, we have veteran guys who have played all over the world and young guys who have experience back there. It’s not like any of us can’t play.

Williams’s presence aids a position that has been a problem area all season. Steven Caldwell played in only two games and was forced to retire due to recurring leg injuries. Winter signing Damien Perquis has battled a few injuries as well, though the bigger issue has been Perquis’s shaky-to-mediocre play in recent months.

Perquis is hardly the only one to blame, however, as seemingly every game features at least one goal-conceding blunder from a different player. Vanney has regularly faulted the entire lineup for the defensive errors rather than just the back line, which is a valid stance given how Vanney’s own formations may have been part of the problem. TFC’s regular 4-4-2 diamond has given opponents lots of room to manoeuvre on the wings — and has led to several defensive breakdowns.

It may not be a coincidence that Toronto’s biggest win of the season — a 5-0 rout of Orlando City SC on Aug. 22 — coincided with the use of a 4-5-1 formation.

“Our willingness to close [Orlando City] down defensively, we really protected our back line which meant they had very few, if any, plays they had to make,” Vanney said at the time. “That’s been some of the issue for us; making sure that all of our guys were doing our defensive work and making sure it wasn’t all falling to the back line. To be fair, a lot of the goals we gave up were coming off of set-pieces or dead-ball situations… not too many were coming just the run of play or teams breaking us down.”

It’s clear by this point that the Reds are much less an MLS Cup contender beset by a few defensive errors than they are a middling group being carried by one exceptional individual. Even with this being the case, if the defence can limit itself to a minimum of silly mistakes, that might still be enough to make some postseason noise since Sebastian Giovinco has been just that brilliant.

When TFC signed Giovinco to a Designated Player contract last winter, there were concerns that the striker would fall victim to the same fate as other heavily hyped Reds DPs. He would either succumb to injuries or struggle (i.e. Danny Koevermans, Torsten Frings, Mista) thanks to the physical MLS style of play, or Giovinco could lose interest in North American soccer, like Jermain Defoe.

Instead, the five-foot-four Giovinco has been the true “bloodybig deal.” The Italy international recorded 19 goals and 14 assists over his first 28 MLS matches, rewriting the TFC record book on a near-weekly basis and putting himself firmly in the running for both MLS MVP and Golden Boot honours.

“I would think he’s at the top of the [MVP] list and I would say it’s not a very long list,” Vanney says. “He’s proven that over the course of the year… that he’s that guy. For him to win it, we all need to be good and he needs to continue the form that he’s on.”

No game better emphasized Giovinco’s one-man gang status than the Reds’ 4-4 draw with New York City FC at Yankee Stadium on July 12. The forward scored three goals, assisted on the fourth and could’ve added another finish of his own had a penalty kick not hit the post. It was a thoroughly incredible performance that stole a point from a horrid TFC defensive effort.

Toronto’s 3-1 win over the Colorado Rapids on Sept.19 was a more typical Giovinco game, as he “only” scored a brace, earned an assist and picked up four fouls. That last number could’ve been higher had some borderline tackles gone the other way.

“There were a few times when I think the referee may have gotten it wrong but that’s the game of soccer, that’s how it goes,” Giovinco said after that match, via a translator. “I think all players need to be treated equally. If there’s circumstances when a player is being fouled intentionally or if the foul is malicious, that should be picked up on but all players should be treated equally.”

The striker said “it feels like” defenders are playing him more roughly as the season goes on, as everyone in MLS is now aware of what he can do. He leads the league in fouls suffered and, despite missing just one game all year, worries about his durability have only increased. Giovinco is now clearly so important to TFC that a significant injury will sink the club’s season.

Depth has long been an issue for TFC, as the team has constantly fallen short by trying to get away with a “stars andscrubs” strategy of a few star DPs propping up a thin overall roster.

The strategy might finally work in 2015, since Giovinco has been so good and this year’s Reds are at least deeper on paper, even if they’ve yet to find the ideal way to mix and match this depth.

The schedule might also guard against a collapse. Colorado was the first of five straight home opponents for TFC before its season finale at Saputo Stadium against the Impact. After beginning the season with seven straight away games thanks to BMO Field renovations, the Reds now get the comfortable flip side of that extended road trip.

“All year we’ve had one eye on this final stretch knowing that we were getting five games at home and the finishing with the away derby in Montreal,” captain Michael Bradley said. “It’s a huge opportunity for us. Nobody’s going to give us the points just because we’re playing at home, we understand that, but again it’s a great chance.”

That Montreal game looms large, as the Impact have made a late charge since adding Didier Drogba and firing coach Frank Klopas.

NYCFC and even Orlando aren’t out of the picture either, sothere’s still a chance the Reds could slide out of the MLS Cup bracket entirely.

But, really, could Toronto stumble so badly that they’re passed by not one, but TWO teams? What are the chances?