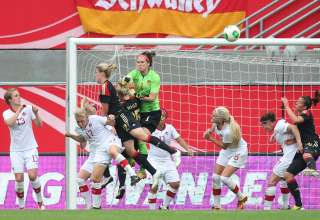 Seventeen days ago, the Canadian women’s team lost 3-0 at home to the United States; a scoreline that flattered the American visitors, who were held for three-quarters of the match and then exploded late.

On Wednesday, on the road in Paderborn against another elite national team, the Germans, the Canadians lost 1-0. But even though the scoreline was less severe, it was a more sobering reality check than the match against the U.S.

Canada struggled to find itself in a game that saw the Germans attack in waves. Even thought the Germans didn’t open the scoring till the 52nd minute, a low rocket of a shot from Leonie Maier, it was a game that saw the hosts show that they or of a different class than Canada. When Canadian coach John Herdman says that he is desperately looking for attackers, that he needs to find wing players, he’s not kidding.

Through the first half, it was a case of bend-but-don’t-break for the Canadian team. Canada escaped the first half 0-0 because of good goalkeeping, last-ditch tackles and, well, luck.

Actually, the Canadians earned a golden chance to open the scoring just two minutes in; after German defender Annike Krahn misjudged a bounce, Christine Sinclair pounded on a ball on the left wing and pushed it to the middle of the area for Diana Matheson. But her low shot was denied by a diving stop from German keeper Nadine Angerer.

But the Sinclair/Matheson partnership at the top of the Canadian formation couldn’t carve out any additional chances. The Germans attacked as a team, with both fullbacks pushing well up the field and even holding midfielders venturing deep into Canadian territory. That sustained pressure forced Kaylyn Kyle and Sophie Schmidt, who are supposed to support the Canadian strikers from midfield, to retreat. And that left Sinclair and Matheson isolated, left to chase hit-and-hope balls.

And, after the one Matheson attack, the Germans got into gear. Anja Mittag forced Canadian keeper into a save, after the German forward slid to get to low cross in the box. Mittag also launched a dangerous shot in the 13th minute, just wide of the goal.

German forward Celia Okayino da Mbabi could have scored two or three, but her 18th-minute header just went wide. In the 30th, Okayino da Mbabi looked to be clear in on goal, played in by Mittag, but a diving tackle from Rhian Wilkinson broke up the play. On the ensuing corner, the ball fell to Okayino da Mbabi but McLeod was square to the shot and made the save.

Four minutes before halftime, Okayino da Mbabi was able to cut inside of Canadian central defender Kadeisha Buchanan. The German forward latched onto a low cross but her effort was just a hair wide of the near post.

Six minutes into the second half, Okayino da Mbabi was only a couple of feet from goal and beat Buchanan to a cross. But, when it was easier to score than to miss, the German badly misjudged her headed effort and the ball sprayed wide of goal. Buchanan left after 70 minutes, with debutante Rachel Melhado taking her spot on the backline.

But, in the 52nd, the goal came. Wilkinson, at left back, was caught tucking too far in as the Canadian back line tried to stop a central attack. The ball was sprayed out to Wilkinson’s side, finding a wide open Maier. Even though Maier was at a tight angle to goal, she unleashed a vicious low drive that tucked inside the far post.

The German goal illustrated the differences in the two teams. When the Germans got the ball, they made sure not only to possess it, but to have it in dangerous areas of the field. They brought numbers forward. They were bold. Meanwhile, Canada struggled to involve the midfield or wingers into the attack. On crosses, the Germans would put four or five black shirts (yes, the Germans wore black, not the traditional white, at home) in the Canadian area. When Canada attacked, white shirts were few and far between.

And the chances didn’t stop. Dzsenifer Marozsan banged a 30-yard effort off the post in the 65th.

In the dying seconds, the Germans hadn’t relented. McLeod was forced into an excellent diving stop to deny Jennifer Cramer, and then defender Carmelina Moscato hooked the German second effort off the line.

McLeod, Canada’s best player on the night, made a fantastic leaping save to deny Fatmire Bajramaj a stoppage-time goal. If not for McLeod, this would have been a more severe scoreline than the Americans managed against Canada.

The closest Canada came to goal? When the two German centre backs miscommunicated and the ball ended up being loose in the area. But it was cleared away before Sinclair could get to it. But in terms of Canadian invention, that was clearly lacking.