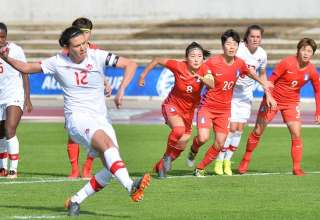 Christine Sinclair scored twice in Canada’s 3-0 win over South Korea Monday at the Algarve Cup. With the win, Canada finishes second in its group behind Sweden, who beat the Canadians to open the tourney.

But, come on, let’s face it — at this point, Canadian soccer supporters are putting team goals behind Sinclair’s chase of greatness. With 172 career international goals, she’s now just 12 behind Abby Wambach for the all-time lead in international goal-scoring. And, it needs to be pointed out that Sinclair has hit her goal-scoring total with a lot fewer home friendlies than Wambach has had — and fewer friendlies against lower ranked nations that seem almost designed to pad national-team statistics.

Well, at least, when Sinclair finally catches and passes Wambach, this is one honour that FIFA can’t find a way to give to Marta, instead.

Sinclair’s first goal came after South Korean keeper Young-Geul Yoon stopped the initial penalty kick; but the rebound came out at just the right angle for Sinclair to pounce on the ball and make no mistake on the second attempt.

After Jessie Fleming’s lob made it 2-0, Sinclair got goal No. 172 after a scramble in the Korean penalty area. The ball went off the post, caromed to Sinclair and she stuck the ball in the net.

With both goals coming off fortuitous rebounds, it’s clear that the soccer gods are telling Sinclair that she needs to catch Wambach. They won’t be satisfied till a natural order of things comes to pass.