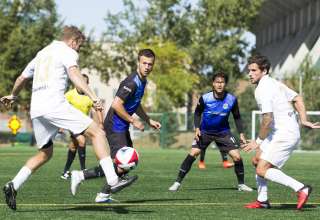 The long flights, the brutal schedules, well it’s supposed to be that teams dominate at home, but struggle to get points on the road. But, so far this fall campaign, the Eddies are undefeated on the road, and winless at home.

Last season, the Eddies were an outstanding 12-2-2 at Clarke Field.

The Eddies will try and try to get their first Clarke Stadium victory of the fall season this Sunday, when the Indy Eleven pays a visit. And they’ll also try to clear the air after last Sunday’s painful display at home — a 3-0 loss to North Carolina FC.

“I think we enjoy being on the road,” said Eddies midfielder Ben McKendry, who joined the team on loan from the Vancouver Whitecaps just before the start of the fall season. “We enjoy being around each other, maybe there’s a few less distractions when we’re on the road, when we’re stuck in a hotel. We’re a tough team to beat and I think teams recognize that. When we go on the road we have the mindset that we need to nick a point, and maybe three points, and we’ve done that quite a lot.”

But how to translate that road success into wins at home? McKendry doesn’t believe that the results aren’t a fair measure of how the team has played at home. Outside of last weekend’s loss to NCFC, the Eddies haven’t played poorly at home, in his eyes.

“I think we have the same mentality at home. We’ve only lost two games at home [fall season], but outside of this last weekend, they’ve all been close. I think we’re a tough team to play right now.”

Coach Colin Miller is bemused by the difference between the home and road results.

“It’s million dollar question, I think it’s a great question and I don’t know if I can answer it, to be honest with you,” he said after Friday’s training session. “There’s a mentality when we go away from home to be much more difficult to beat and hit teams on the counter-attack. But teams are coming in here and changing the way they play because they see we do want to attack when we are at home. Some teams have come in and sat in, making it more difficult for us to try and break down.”

He noted that NCFC coach Colin Clarke adjusted his team’s game to take away the Eddies’ wide players — and sat more offensive players like Ty Shipalane and Lance Laing.

“We’re a team that’s very dangerous on the road because of the pace we have in attack,” said Eddies’ midfielder Ben Fisk. “Because of our counterattacking ability, we’re quite dangerous, I’m sure that plays into it. But when we’re at home, we try and get on the ball and dominate games more, so whether that’s been why we haven’t been as good at home, I’m not sure, but we’re trying to get results home and away and we hope we can do that this Sunday against Indy.”