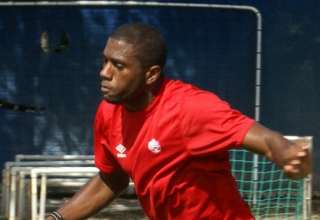 It is the archetype of the Canadian national-team striker playing professionally in Europe.

Canadian forward is a go-to player for his club as it pushes for promotion; but, when the club arrives at the top division, that Canadian goes from weekend hero to bench player. And that Canadian either fades into obscurity or has to move back to another lower-division club.

We saw Paul Peschisolido make this almost a tragic-yet-heroic routine through the 1990s; he’d help his club get promoted to the Premier League, or he’d finish as his First Division/Championship side’s top scorer, but was never able to make the jump to the Premiership himself. He had to settle for being the folk hero of Championship football — a player who was loved by supporters of Birmingham City, West Bromwich Albion, Fulham, Derby County and Sheffield United.

And, it looks like we can add Olivier Occean to that club. Simeon Jackson looks likely to join it, as well.

Occean has been widely linked to a move from Eintracht Frankfurt to FC Kaiserslautern (CLICK HERE). If the move is completed, the Canadian striker will return to the 2. Bundesliga for the 2013-14 campaign.

In the season before last, Occean won the 2. Bundesliga scoring title and was a key part of SpVgg Greuther Furth’s promotion season. Then, Eintracht Frankfurt made a splash by bringing Occean on board. Hindsight proves that this was a mistake. In the 2012-13 Bundesliga season, as part of a bigger club with more options at striker, Occean scored just once last season.

Occean’s move will leave Canadian supporters wondering just when we’re going to see a national-team striker rise from a lower European division — and then stick in the top flight.

Randy Edwini-Bonsu is looking for work after his contract expired at Eintracht Braunschweig; he was used sparingly in the club’s promotion season, and won’t be there when the team plays in the Bundesliga this fall.

Jackson, like Edwini-Bonsu, is an unattached player at the national team’s pre-Gold Cup camp; in the past two Premiership seasons, he was on the periphery at Norwich City, pushed aside after being one of the Canaries most important players in their promotion season. He went from being a hero, a creator of key game-winning goals, to a forgotten depth player.

And now, if the stays in England, he’ll likely move down a division — and you wonder if he’d been better served had he been set free by Norwich a couple of years ago. He could have found a new club that would have given him needed playing time. But, while you can’t argue with an EPL paycheque, the fact is Jackson couldn’t advance as a player while spending time on the bench.

Unlike Peschisolido, who went down to find new clubs immediately after he got his old club promoted, Jackson had to spin his wheels.