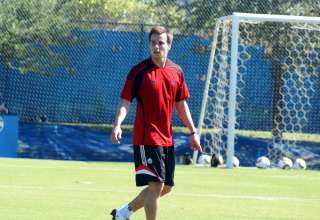 Will the Montreal Impact’s loss be FC Edmonton’s gain?

The Eddies confirmed Monday that Canadian midfielder/defender Fabrice Lassonde — who has been playing the left back position in the majority of preseason matches — has inked a deal with the club. Lassonde confirmed that it’s a one-year deal.

Lassonde, a Quebec native who has played both left and right back for various Canadian national youth team, had been on the books of Bundesliga side FC Ingolstadt until 2011. When he was released, he trained with his hometown Montreal Impact over the summer — but wasn’t signed. He went back to Germany, but couldn’t find an offer that suited him, and then took the opportunity to come to FCE on trial, where he has impressed at camp.

“Of course, it is disappointing to not get signed when you are training with a team,” said Lassonde of the Impact experience. “But at the end of the day, I wasn’t part of their plans. And I am excited about the opportunities here in Edmonton.”

Lassonde is a versatile player that doesn’t mind playing on either wing.

FCE tried a similar experiment last year, when Eddy Sidra, predominantly a right back when he played in Germany and for the Canadian national team, was used on the left to great success. But Sidra’s injury-prone season led to FC Edmonton and him parting ways at the end of the campaign.

Lassonde said he is enthused to be an Eddie.

“I have been very happy since I have been here,” he said. “I have been with the club through preseason in Phoenix, Vancouver and Winnipeg, and I really like this club. They really want to develop players. I like the coaching staff and the players, and I hope I can do really well on the field.”

During the off-season, Director of Soccer Operations Joe Petrone had declared that the left side of defence was the club’s most pressing need — and, in the off-season, both Lassonde and French fullback (and ex-Impact player) Kevin Hatchi were brought into the fold.

American defender Adam West and Haitian Fabien Vorbe are still in camp with the Eddies, but have not signed.