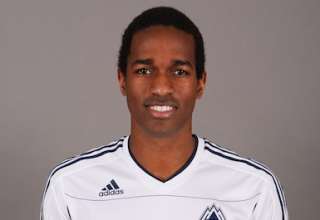 The Vancouver Whitecaps announced Thursday that striker Atiba Harris had successful surgery on his right meniscus on Tuesday.

Harris had been effective for the Whitecaps before leaving the lineup due to injury. In five starts, he was in on five goals (two goals, three assists). He was key in the April 2 3-3 draw with Sporting Kansas City, which saw the Whitecaps rally from a three-goal deficit in the second half. He scored once and then set up the equalizer by beating several SKC defenders to a long, speculative ball punted down the field in time added on.

Whitecaps spokesman Nathan Vanstone said there is no speculation on a time frame for Harris’s return to training.
“He just had the surgery, will work with our medical team, and we fully anticipate a complete recovery,” Vanstone wrote in an e-mail. The procedure was performed by orthopedic surgeon Dr. Bob McCormack.

DEPTH ADDED: To boost the club’s depth, the team announced the signing of veteran Peter Vagenas on Thursday. The 33-year-old veteran won two MLS Cups with the Los Angeles Galaxy, and spent last season with the Seattle Sounders.

“Peter is an experienced MLS player that reads the game well and is strong technically,” said Whitecaps’ head coach Teitur Thordarson in a release. “He will bring additional leadership to our squad, as we head into an important stretch of our season.”