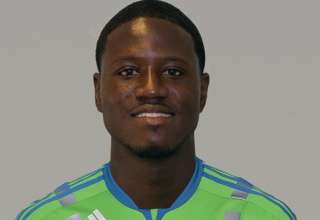 Sometimes, you are so sure of the Player of the Week outcome, you almost forget to fill in your ballot and have it to the head office in time.

Sorta like an Alberta election: Voter turnout suffers because it’s assumed that the election is a done deal before the writ is signed by the lieutenant-governor.

This was one of those weeks. With two goals and an assist against FC Dallas, the team with the league’s best record, Seattle Sounders forward Eddie Johnson ticked off all the boxes when it comes to Player of the Week-worthiness. So, it wasn’t a surprise that he got the most checkmarks on the ballots from the members of the North American Soccer Reporters.

Johnson scored twice against Dallas, including the game winner. And, after a brutal start to the season, Seattle is now undefeated in six, and now has 15 points from 10 matches. That’s good enough for sixth place in the West, but Colorado is just one point ahead, and has played two games more.

Maybe this will be what Seattle needs. We’re used to seeing the Sounders get off to hot, hot starts to the season, then crash when the games matter most. Maybe getting some adversity early in the campaign will help them in the fall.

How The 11 voted: Johnson. Just got the vote in under the deadline. Even if you’re pretty sure you know who is going to win, you need to get out and vote, anyways. I think there’s a lesson there about democracy as a whole.