October 07, 2022
9 New Articles
Home Canadian Premier League CanPL News and Notes No CanPL open trials in Edmonton? It could be an advantage for the Eddies 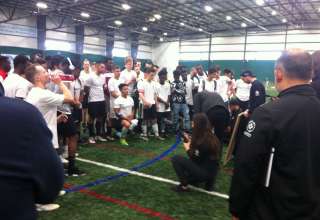 Hosted by Calvary FC in the Foothills facility located in a southeast Calgary industrial park where the streets have Star Trek-ish names like “Endeavour” and “Exploration” and “Enterprise,” the latest instalment of the open trials is as close as they’ll come to Edmonton.

It’s estimated that maybe a quarter of the players at the Calgary trials made the three-hour drive down the QEII highway from the Alberta capital. FC Edmonton’s Academy had a couple of its players take part.

“One hundred per cent, if I am being cheeky about it, I think it’s our advantage,” said Paulus. “There are none of our academy kids here, except for the couple who want to come for the experience. But, for the most part, our academy kids aren’t here, and these are kids we’ve contributed a substantial expense for, to keep developing. So it’s great no on else gets to see our academy play.

“There’s certainly a couple of boys back home that we know about, that we’ve been talking to, that we’re watching, who will probably have an opportunity. But the other coaches won’t get to see these players and they’re local for us. It probably gives us an advantage there.”

Paulus is admittedly biased, but he believes Edmonton is one of the top breeding grounds for soccer talent in Canada. Four Edmontonians are currently under MLS contracts — Shamit Shome, Tosaint Ricketts, Amer Didic and some kid you might have heard of named Alphonso Davies.

“They’ve got some great clubs down here in Calgary and they’ve some great people involved on the technical side of the game doing great stuff,” said Paulus. “But player-wise, I am partial to the Edmonton player. I find that the Edmonton player is a little different than you’d find in the other places in Canada. A lot these Edmontonian kids, especially on the north side, they have a bit of grit about their game. That bit of determination. They can be nasty, they have a never-going-to-lose attitude. I’m happy with what’s happening in Edmonton at the youth level… Alberta, to me, is that quiet province, and it’s the one that gets overlooked. Edmonton, in particular, gets overlooked. There’s a U-20 national-team camp happening, and I don’t see any of our players there. I’m baffled by that because I know the kind of players we have.”

While Paulus said Alberta is often overlooked, he said — even before the open trials hit those provinces — the CanPL coaches knew a lot about Ontario and Quebec players because of the rise of League1 Ontario and the PLSQ. So, there’s really no place to hide players of quality in those provinces.

CanPL commissioner David Clanachan said that 70 to 80 per cent of the players that have been seen at the open trials were previously on the league’s radar.

Clanachan said the league is still going through the process when it comes to how many local players teams will be allowed to protect.

He said one of the most-repeated questions he gets is about local players.