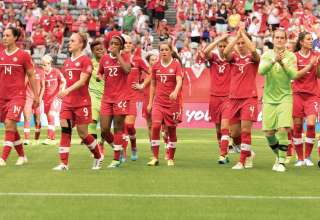 Canada’s players had to give the fans at BC Place a teary salute after they lost their Women’s World Cup quarter-final to the English. The success of the team at the London Olympics was a feel-good story that lingered for three years. But did loyalties that were spawned in the Olympic run come back to haunt Canada in 2015? Damn straight they did…

When Canadian women’s national-team coach John Herdman took over the program after the 2011 Women’s World Cup disaster, he inherited what he called a “broken” group of players, who were willing to blame anyone but themselves for their last-place finish in Germany.

He introduced the players to the power of positive thinking; he brought in sports psychologists, he quoted the work of Holocaust survivor Viktor Frankl.

He was also unquestionably loyal to his core of players. And, in retrospect, if there is one criticism that can be levelled at the Renaissance man, it’s his stubbornness when it comes to protecting some of his veterans.

At the Women’s World Cup quarter-final stage, the players to whom he’s been the most loyal were the ones whose mistakes had the greatest influence on the game. A 2-1 loss to England was a heartbreaking, yet fair, scoreline.

First, there was Lauren Sesselmann. She was out for more than a year with a severe knee injury and, when she returned justbefore the Women’s World Cup, she was thrust into a centre back spot. It wasn’t her usual national-team position — she’d played mainly as a fullback for Canada in the past — and her fitness was a question mark.

Throughout the tournament, questions had been asked of her; was she losing her marks? Her passing was unsure. And, to underline it all, a giveaway by Sesselmann led to England’s first goal.

But, did Sesselmann fail on her own, or was she put in a position to fail because Herdman was so staunchly loyal to her? Did his loyalty actually put Sesselmann in a no-win situation? Athletes are filled with pride — and rightly so. In nine cases out of 10, that pride will help spur an athlete to better performances. But, when that pride is misplaced, it can lead both coach and athlete into a downward spiral, as their will to succeed prevents them from recognizing that they’ve put themselves in a position from which they can’t succeed.

In that game, Melissa Tancredi also misfired in the early stages, spurning a chance that could have put Canada up a goal. She was set free by an astounding cross-pitch pass from Christine Sinclair, and then missed the target. Tancredi, after the 2012 Olympics, took two years off to go to school. That’s fair; she is going to make far more money as a chiropractor than as a soccer player. But, when she returned, she simply wasn’t the same player. But Herdman used her regularly through the tournament, even though she was largely ineffective on the left side.

It’s also difficult to pile on when it comes to criticizing Tancredi, Like Sesselmann, she was put in a position where she had the greatest chance of failure. Tancredi was a massive part of Canada’s push for a bronze medal at the 2012 Olympics. But the physical hurricane of a centre forward had been replaced by a peripheral player.

The loyalties also influenced other roster decisions. Selenia Iacchelli has been an inspiration, continually coming back from injuries. In fact, she was featured in the first issue of this magazine — because of how unusual and against-the-odds she’s been in terms of coming back from injury after injury. But, she was named to the roster and  wasn’t used. Diana Matheson, one of our all-time greatest players, also made the roster, despite a knee injury that didn’t allow her to play until the quarter-final, when she came on as a sub. Defenders Robin Gayle and Emily Zurrer also weren’t used throughout the Women’s World Cup. Compare that to the Japanese, who used all 23 players on their roster.

Herdman stayed true to so many of those veteran players but left Janine Beckie, who he’d worked to repatriate from the American program, off the roster. Beckie was a genuine scoring threat for the U-20 team and is an NCAA scoring sensation; and, with Canada being so starved for offence, having one more scoring option, well, you can’t have too many strikers, can you? But, after the first game of the group stage — a 1-0 win over China that needed a late penalty — Herdman faced the media and admitted the team, as it stood, simply couldn’t put crooked numbers on the scoreboard.

“We’ve scored a few goals this year, but we haven’t scored threes, fours or fives.

“With the group that we’ve got, we’ve always said, look, Canada, at this stage in our development, are going to be a goal or two, max, against these top teams. And, that’s what we’ve got to live with.”

Yet, decisions were made that further limited the team’s already limited scoring options.

And, it was clear from early in the tournament that some of the veterans weren’t being put in the prime positions to succeed. Tancredi could have been useful as a super sub, able to go up top late in games and cause havoc. Sesselmann, well, should have been spotted back in when needed, considering she didn’t look like she was 100 per cent back from a long-term injury.

And Sesselmann, like the other members of the Canadian backline, was under tremendous pressure. They were all fully aware that any mistake could be a major problem, because Canada simply didn’t have the firepower to get the goal back. And lack of belief in your team’s offensive capability leads to tense, mistake-prone defending.

“So, the defence, their job is to prevent goals, the front five to score, and there’s a balance in between where they help each other,” Herdman said. “But there’s definitely a bit of pressure on that front five group to contribute.

“I think we’ve got a performance in us where we can blitz a team by two, three goals, but not five or six at this level. We just don’t want to be in that position every game where you’re hanging in by your fingernails because you’ve only got one goal like it was against China.”

So, the defensive players were walking on eggshells. The offence was sputtering; and, when things weren’t working, there wasn’t a will to change things.

Loyalty is a great attribute in many scenarios. Loyalty to friends, causes, beliefs.But, in high-stakes sport, where the new is always pushing to replace the old, loyalty can be an Achilles Heel.