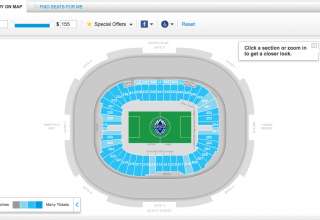 As Toronto FC set Canadian MLS viewership records during their remarkable 2016 playoff run, we wondered what could be next for MLS in Canada. During the off-season, a new TV package with Bell Media was announced, and that included a slate of games that will be broadcast coast-to-coast on CTV. MLS on network television! Wow!

But, Wednesday, the Vancouver Whitecaps were the first Canadian MLS team to play a meaningful game — away to the New York Red Bulls for the first leg of their Champions League quarter-finals.

No highlights were to be found on the late-night roundup shows. The game was broadcast on CONCACAF’s Facebook page — there were no takers from Canadian television.

The game finished in a 1-1 tie, even though the Whitecaps spent the final 20 minutes down a man. The best moment? Red Bull Sacha Klejestan opting to try one of those cheeky up-the-middle change-up efforts on a penalty kick, and getting stuffed by Whitecaps keeper David Ousted.

But most of us, well, missed it.

Yes, the CCL has had its challenges establishing itself; empty stadiums are the norm until we get to the very late stages of the tournament. The tournament will undergo a major revamp, as it will go to a knockout, Cup-style format in the future. (In my opinion, we’re only going to start really being enthusiastic about a regional championship if CONCACAF can find some way to merge the tournament with South America’s Copa Libertadores).

But a meaningful game is a meaningful game, even if only 3,000 and change bought tickets to see the game in New Jersey. A look on Ticketmaster’s page (included) shows that most sections of BC Place are designated as having “many tickets” remaining for next week’s second leg.

Despite the CCL’s unsure status, it’s an ominous beginning — on the media side — for the soccer season in Canada, considering the hype that came with how last season came to a close.

But this year could be a difficult one for soccer in Canada — from a media perspective — despite the TSN/CTV/MLS deal.

Last year offered a perfect set of conditions for MLS to grow in Canada. No Canadian teams made the NHL playoffs, which sent Sportsnet and CBC’s ratings tumbling. And most of them were out of the playoff races early, meaning the March stretch run was also dull. We weren’t talking about hockey at the water coolers. And, to make things worse, the game’s most-talked about young star (in 2015-2016), Connor McDavid, missed half of the season with a broken clavicle.

This year is different. The three most marketable young players in the game — Auston Matthews, Patrik Laine and McDavid — all play for Canadian teams. The Maple Leafs, who are the major media driver for the NHL, are in a playoff race — and are exciting to watch, with Matthews and a supporting cast of young stars-to-be. The Canadiens look to be playoff-bound, with a coaching soap opera thrown in. The Senators have improved greatly. We are seeing the best Oilers team in a decade (and likely longer). The Flames and Canucks aren’t out of the playoff chase. The Jets have Laine.

Numeris’s TV ratings tell us that Hockey Night in Canada is still entrenched as a top-20 show in Canada, with the early game usually getting between 1 million-1.3 million viewers on a Saturday night. To put that in perspective, it’s comparable to the 1.5 million pulled in by TFC for MLS Cup, but we’re not comparing apples to apples. The real comparison would be stacking the MLS Cup ratings against what Sportsnet and CBC will be pulling in from April to June — soccer playoffs vs. hockey playoffs. And the very thought of an NHL playoff doubleheader — an early game with Matthews and the Leafs, followed by a late game with McDavid as the attraction, will totally change the media landscape. There will be no room at the inn for much else. If Montreal and Toronto were to meet in a playoff series, all bets are off. If Calgary were to meet Edmonton in a playoff series, all bets are off.

But TV viewership is only part of the story — and this is where I’ll write as someone who is, well, a media member.

Hockey is our go-to in the sports media. It’s what attracts the most eyeballs to our pages. It’s the anchor of both the TSN and Sportsnet highlight shows. It anchors what’s left of the sports pages in our shrinking newspapers.

We have seen massive cutbacks in our industry. I sit in the massive press box in the brand-spanking news Rogers Place, and the seats are mostly empty — a stark contrast to the regular sellouts for Oilers home games in downtown Edmonton’s sparkling new palace. But, for those of us in the media who are there, we’ve been asked to do more than ever. With fewer staff writers and freelance budgets shrinking, print and broadcast reporters have to do more with less. And, editors have to pick and choose. Unlike last season, where you could justify scaling back on hockey coverage, an editor needs to make sure he or she is squeezing every word or second of broadcast time possible out of the NHL this season. And that means your reporters will have less time to cover other sports — or, will be using their time-in-lieu during the summer to make up for all the overtime they burned during hockey season.

So, soccer won’t have the same window of opportunity that it did in 2016. Still, there is so much room for this game to grow in Canada — we just shouldn’t use media coverage, or lack of it, as a measuring stick. And, heck, chances are that if you live in Canada — you just might like both the NHL and MLS (heck, I know people — look away, TFC fans — who love both soccer and the CFL!). So enjoy the rides, and make sure to leave enough time so you can have like, a life and stuff.