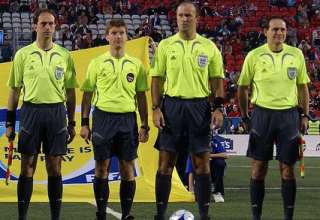 Nelson Rodriguez, MLS Executive Vice President of Competition, said in a conference call on Wednesday that the formation of the new Professional Referee Organization will not affect the officiating agreement MLS has in place with the Canadian Soccer Association.

The CSA confirmed the agreement stipulates that the percentage of MLS games officiated by Canadians is based on the number of games played in Canada. With Montreal, Vancouver and Toronto all in the league this season, with 17 homes dates each, 51 regular-season MLS games will be played on Canadian soil.

But, that doesn’t mean Canadians have to do matches in Canada and USSF referees only do games in America. For example, USSF ref Baldomero Toledo can do a game at BMO Field, while CSA official David Gantar can do a game in San Jose. The key is that Canadian officials have to be called to do a number of MLS games that reflects the amount of total MLS games played in Canada.

The fact that the Montreal Impact is now on the league schedule has actually created more opportunities for Canadian refs in MLS this season.

This week, MLS and the United States Soccer Federation, with the CSA consulting, launched PRO, an independent organization that will manage referees in pro leagues in Canada and the United States, including MLS and NASL. Veteran English referee Peter Walton will oversee the program, which is aimed at improving the quality of officiating in North America. What PRO does not do is give Walton the ability to reduce or increase the number of games that Canadians will officiate in MLS from season to season. And, because Canadians have to ref 45 games this season, it means that our officials will be ensured to benefit from the program.

Rodriguez said MLS has a mandate to have the best officiating of any league in the world by 2022.

“What we are doing is nothing short of a little revolutionary, but it will not be easy.”

Walton said his job was “to propel North American officials to the next level, and to keep the people in the rest of the world award of how good officiating is in North America.”

MLS received a lot of negative publicity in 2011 over losing three of its stars — Seattle’s Steve Zakuani, FC Dallas’s David Ferreira and Real Salt Lake’s Javier Morales — to serious injuries. Those injuries led to widespread calls for MLS to improve its officiating.

But Rodriguez pointed out that MLS had been discussing how to improve refereeing a year before any of these injuries occurred. And, he noted that, after review, in the case of all three injuries, the referees were vindicated.

“In each of those incidents, the referees made the call correctly on the field,” said Rodriguez. Offenders were given straight reds on the Morales and Zakuani challenges. And, correctly, there was no call on the Ferreira injury. Replays showed Vancouver’s Jonathan Leathers made a clean challenge on the 2010 MLS MVP, and that the broken ankle was more a case of bad luck than malice on the Whitecap’s part.

RELATED:
Another year, another MLS promise to crack down on fouls (CLICK)
Mullan gets record suspension; no action taken on Leathers (CLICK)