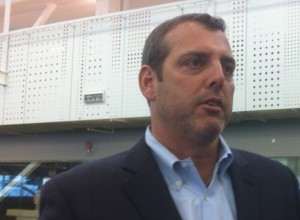 There will come a time when the men running Major League Soccer and the North American Soccer League will sit down and discuss how they can work together on player development in North America.

But now is not that time.

New NASL commissioner Bill Peterson was in Edmonton Tuesday, as part of a tour of the league’s members. And he took some time to speak to the media about his vision for the league, Edmonton’s stadium situation, expansion and the league’s relationship with MLS.

He said he is focused on building the NASL in each of its markets, making sure the teams are strong parts of their cities’ sports communities. And he acknowledged that MLS Commissioner Don Garber is also busy building Division-One soccer in North America.

“I’ve worked for Don, I have worked with Don, I’ve known Don for probably 17 years. When the time is right to have those conversation, both he and I will know,” said Peterson.
As it stands, because MLS teams don’t pay transfers for second-division players in North America, a lot of great NASL talent doesn’t have the chance to rise to MLS. It is no secret that both the Montreal Impact and Vancouver Whitecaps would still like to have reserve sides in NASL — as both were key members of the second-divison breakaway group that created the league.

And these are very interesting times for NASL, because of its relationship with Traffic, the Brazilian mega-agency that owns the Fort Lauderdale Strikers and is currently an investor in the Carolina RailHawks and Atlanta Silverbacks. Traffic already had the majority of rights to CONCACAF World Cup qualifiers — and some of those games have featured NASL advertising. Two weeks ago, Traffic won the rights to the next two CONCACAF Champions Leagues and the 2013 Gold Cup. In making these moves, Traffic is isolating SUM, the marketing arm of MLS.

And, CONCACAF General-Secretary Enrique Sanz is a former broadcasting head with Traffic. And, CONCACAF has just moved its offices to Miami, where Traffic and NASL have their North American headquarters.

What will the growing partnership between Traffic and CONCACAF mean for NASL?

“They are the agent for the league,” said Peterson. “What I can say is that we have a great partnership. They have a great will to succeed. And it is a company on the rise right now. For us, they are very strong.”

Peterson envisions the NASL growing to 16-18 teams in short order. Ottawa and Virginia come in for the 2014 season. The New York Cosmos come in for the second half of the 2013 season. Peterson said he has been impressed by the passion and the government support from the Indianapolis bid, spearheaded by American soccer executive Peter Wilt.

But Peterson said he still has eyes on Canadian expansion.

“Maybe it’s a little premature to say anything. But the city everyone says first is Calgary. It makes a lot of sense geographically. But I have spent a lot of time in Winnipeg. And they have a new stadium. And they great sports-fan base. I think they could be an option, as well.”

And, as for the Cosmos, he wasn’t concerned by the team’s announcement that it will begin play in the NASL 2013 fall season, and will skip the spring campaign.

“It was the smartest decision I have seen,” he said. “I’ve seen a lot of start-up teams and they never have enough time. For them to realize they need extra time was really smart. And they’ll still be stuck for time.”

But, because the season is now split into “two sprints,” Peterson is confident the intergrity of the league won’t be compromised. Plus, waiting for the fall session will give the Cosmos brass the chance to take advantage of the July transfer window.

As for Edmonton? Tuesday’s visit was more of a “get to know you” session, unlike outgoing commissioner David Downs’ last visit to Edmonton, which saw him meet with the mayor and Alberta officials to talk up the team and the viability of soccer-specific stadium in the provincial capital.

But he said he sees “Edmonton making some significant strides” and is more focused on seeing the Eddies draw more fans in the renovated Clarke Stadium in 2013. After FCE has some attendance success at Clarke, well then you can talk about a new stadium.

“Obviously, they have to grow their presence in Edmonton and attract more people to the games,” he said.

FCE played out of 1,200 seat Clarke Stadium. Even though the stadium was often oversold, attendance numbers — because of the limited size of the venue — was small. And a promised renovation to bring the stadium to 4,000 seats was held up by code issues. The team is hopeful the issues with the new stands will be resolved and FCE will play in a bigger venue in 2013.