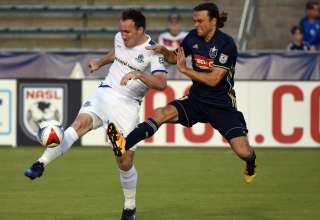 As the Carolina RailHawks, the NASL franchise now known as North Carolina FC never won a game at Clarke Field, and were on the end of the some real pastings. Look at the history of FC Edmonton, and the list of most-lopsided wins in club history are filled with “home to Carolina.”

“I thought they played well,” said Eddies coach Colin Miller of the NCFC/Miami match. “I thought Miami gave them a bit of a pasting for the first 30 minutes, and the game changed because of how well organized they are.”

But, NCFC is expected to be without forward Billy Schuler (hamstring) and midfielder James Marcelin (immigration) for Friday’s match.

The Eddies are in the throes of a four-game losing skid, losing all of the matches 1-0, including Saturday’s loss at Jacksonville. All four losses have had similar ingredients — the Eddies creating enough chances to be successful, but failing to convert the sitters; plus controversial refereeing decisions going against the Eddies that have wiped out potential FCE goals or set the opposition up with free kicks or penalties.

Despite the Eddies struggles on-field, the team is attracting the largest crowds in club history. The team is selling out games at Clarke Field. So Miller admitted his team is feeling the pressure to perform in front of filled stands.

“Crowds have been fantastic for the last three games and we haven’t given them anything to really celebrate. It’s now time to do that.,” he said.

“They’re a little bit different, travelling,” Miller said of NCFC. “But we know we will have to be at our best again, and we are playing quite well. I watched our game from Saturday twice now, and defensive-shape wise, we’re getting far, far better. We didn’t defend the free kick well at all, we allowed a guy to run in and volley it. One more chance hit the crossbar, Nathan made a save in the second half where he came off the line and, other than that, it’s been a routine night for him.”

Miller said he remembers the 2014 season; the Eddies were struggling to score and, on a June afternoon, the decision was made to take Lance Laing out of his fullback position and into a true wing spot. The Eddies beat the RailHawks 6-1. Miller is hoping for the same sort of explosion on Friday.

But, Laing, of course, now plays for the other side. He’s expected to be in the NCFC lineup Friday.

“Anytime Lance Laing in anyone’s side, just from dead balls alone, he has the quality,” said Miller. “On crosses, there’s arguably not a better crosser of the ball in North America, and I’d put that against anyone in MLS. On his day, he can whip the ball in as well as anyone.”

Eddies centre back Albert Watson said the team has to be much better than it was when it travelled to North Carolina earlier this season and got thumped 3-1.

“They did do a job on us down there, they did very well, we weren’t very good,” said Watson. “We didn’t do ourselves justice that night. We have played well over the last few games, but have not finished. So, it’s come to the point where we’re missing chances and then we’re getting hit with stupid referee decisions.”
Watson is still angry about being called for a trip and given a yellow card in Saturday’s loss to Jacksonville. The ensuing free kick led to the winning goal. Watson said the Jacksonville player who went down, Derek Gebhard, had told the referee that he’d fallen on his own. Watson praised Gebhard for his honesty — and still can’t believe, despite it, that he was shown a yellow.

The losing streak began with a 1-0 loss at home to Miami where the referee controversially ruled out an Edmonton goal, then the visitors hit the Eddies late on a break.

“We get a goal disallowed in the 80th minute, it was a perfectly good goal,” said Watson. “If we get that goal, we hold on. No doubt. We’ve never had a lead that we can’t hold on to. We then go into the two San Francisco games, and we had more chances in those games to win six games, never mind two.

“You hope someone takes a chance and it turns our luck. You can’t say we’ve been playing unbelievable, but you can’t say every team we’ve played against this year has been much better than us. They haven’t. We’ve had chances to win games here and away. We just haven’t taken our chances. It’s disappointing. You see us losing games 1-0 four games in a row, that sums up our luck.”