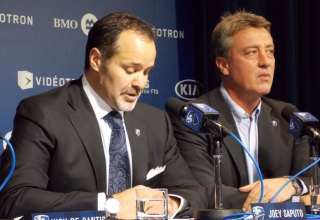 “This is the result of a lengthy search process. We wanted to take all the time necessary to ensure we hired the right candidate and it is a process that I do not want to repeat any time soon,” said Saputo at the outset of the get-together.

“Marco I want to wish you success within the organization because if you succeed, we as a club have succeeded,” he continued before handing the floor over to the incoming gaffer.

“I would like to thank Joey and Nick. Who have shown confidence in me,” Schallibaum began. “When you receive something you have to give something back so it is up to me to now do everything needed to ensure the team has success. I’ve already watched a fair bit of video and the team has a lot of qualities. I like a challenge and I’m ready to fight for this club because it is a well-organized club with a lot of heart.”

He then announced that he had met with the team’s technical personnel yesterday and shared a couple augmentations to the staff. Mauro Biello resumes his function as assistant coach. He will be joined in these duties by Philippe Eullaffroy, until recently in charge of the Academy programs. Youssef Dahha sees his role expand to include responsibilities as goalkeeper coach to the first team as well as maintaining his role in charge of the academy ‘keepers

Asked what he thought of the 22 men presently under contract to the team, Schallibaum declared himself satisfied with the talent on hand.

“They are of very good quality. The core of the team is already in place,” he offered. “That they played together last season will only help this year. There are a few elements that still need to be discussed and I’ll have input in that process.”

Asked what his main wish for the team’s followers was for 2013, De Santis expressed a desire for better results away from the comforting confines of Saputo Stadium.

“I hope they’ll see something different on the road because I think at home, as we’ve expressed, one thing that was very positive about this team was that at least we knew the people went home happy because I think we displayed a very good quality of soccer.”

Would the desire for more productive road record mean a change in the team’s style of play?

“That’s not up to me, that’s up to the coach” said De Santis to a chuckling media corps.

The question was then addressed to the proper authority.

“Ask the president,” said a smiling Schallibaum as he gestured to his right, and provoking more mirth before answering the question

“Let some time pass. Let me work and we’ll see. I know I’m not a big name in Canada but I’m a name in Europe and in Switzerland,” he said. “Give me some time to work with the team and I’ll answer this question.”

Queried about the pressure of making good with a new team in a new league on a new continent Schallibaum replied, “I’m 50 years old; I’ve got 40 years experience in football as a player and a coach. You know, there’s pressure in Switzerland too, you know. They expect us to win games there too. Today everyone is being very nice, but we’ll see how it goes. When we win I go out for a drink, when we lose, I go home alone. I’m joking but you have to have that pressure. If you have no motivation it is difficult to achieve anything.”

A question inquiring as to the length of Schallibaum’s contract with the Impact and what caused him to take the big step across the Atlantic was handled by De Santis initially who said, “The contract is for one year and an option and the reason for coming to North America is again, new experiences…”

“No , you’re supposed to answer about the contract and Marco can answer about what made him come to America,” interrupted Saputo, showing why he usually sits in the centre during these group gatherings and eliciting yet another round of laughter from the assembled throng.

“The challenge is very great for me,” said Schallibaum. “It’s a new world not just for the football but the whole thing. I like the challenge of being with the team and the goals for where you want to be at the end of the season. It’s the perfect thing for me, moving into the future.”

Asked if a one-and-one deal might not be a little short-term given that the team’s last head coach, Jesse Marsch, had a two-year deal with a team option on the third Saputo replied, “We make it into the playoffs, the option for the second year is automatic. The pressure is there and we’re going to do everything possible to ensure success. We hope Marco will be here for more than one, two or three years. One of his strong points is that he is a teacher. We hope he’ll not only help develop not only our young players but also the coaches we have at the academy level.”

European coaches arriving to run MLS teams do not generally set the league on fire. This was mentioned to Saputo as the question period drew to a close.

“I think that statistics are overrated,” he retorted. “I think more and more you’re going to start seeing coaches from the outside that are going to be coming to MLS. Toronto announced today and New York has probably got an announcement coming up. At the end of the day, do you want fresh blood coming into the league or do you want the same coaches rotating within the league? I think it’s important you look at what we’re doing. We’re taking a step. It’s a challenge, we understand that success has not been there and hopefully we can turn it around and be the positive story on that. I think, like Marco said, that soccer is soccer and I think it’s important for us to move that way.”