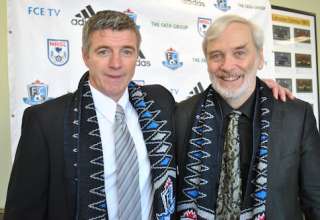 Colin Miller applied for the FC Edmonton coaching job after having a heart-to-heart chat with University of Alberta soccer coach Len Vickery.

Miller was working as an assistant at the University of the Fraser Valley, and when his team met the U of A, he asked Vickery about FC Edmonton. Was the team stable? Was ownership solid?

After Vickery endorsed FC Edmonton, Miller — a former Canadian national-team captain, 15-year Scottish League veteran, and assistant with the Whitecaps — applied for the Eddies’ vacant coaching position. And, on Tuesday, he was introduced as the team’s new head coach, in the same Commonwealth Stadium in which he played for Canada throughout the 1990s.

“This famous stadium brings back a lot of memories,” said Miller, thinking back to the many World Cup qualifiers he played for Canada on the old grass at Commonwealth, as well as that famous 1-1 draw with Brazil back in 1994.

“Edmonton was our home at the time,” said Miller. “We were very passionate about playing here.”

Miller is hopeful about turning FC Edmonton into a winner, after a last-place NASL finish in 2012. And he wants every young Canadian who is playing in the team’s system that there are opportunities for them to impress him and become members of the team’s starting 11.

And, as a former Whitecaps assistant, he has a bit of a head start. He knows some Eddies who used to play in the Whitecaps system, such as forward Kyle Porter and defenders Antonio Rago and Paul Hamilton. As well, he has been watching a marathon of DVDs from the 2012 season.

“There’s not a massive difference from the bottom of the league to the top of the league,” said Miller. From what he’s seen, the key will be to reduce the amount of “dreadful errors” that led to goals conceded in 2012.

“I want to give you (the supporters) a team you’re very proud to come and support,” said Miller. “But no team I’ve ever been involved with has been a shrinking violet.”

FCE owner Tom Fath said it sends an important message that the head coach of the team is Canadian.

“Right from the beginning, we wanted to develop Canadian soccer,” he said. “Today’s move is another step along the way.”

Miller said it’s important that Edmonton develop the young Canadians on the reserve squad as well as the players on the senior side.

“I want to give national coaches, national junior coaches, as many headaches as possible,” he said.

Miller said that FC Edmonton’s brass has agreed to give him final approval on all player transactions. But, as he didn’t sign the contract last week, he didn’t orchestrate the deals that brought 2011 NASL Best XI left back Lance Laing and former Minnesota Stars captain Neil Hlavaty to the Eddies. But he’s happy both players have come to the Alberta capital.

“I have seen Hlavaty play, and he doesn’t shirk away from tackles,” said Miller. “And he was the captain of Minnesota, so that means he’s a leader.”

And it wasn’t lost on Miller that he was named the head coach of FCE on the same day that one of his closest friends, Frank Yallop, was named MLS coach of the year for the work he’s done with the San Jose Earthquakes. Yallop and Miller were regular roommates when the national team traveled.

“Frank and I have known each other since I was the age of 10.”

They played together in British Columbia. And, when Yallop heard that Miller was confirmed for the FC Edmonton job, he sent his friend a text, offering support and anything he could do to help.