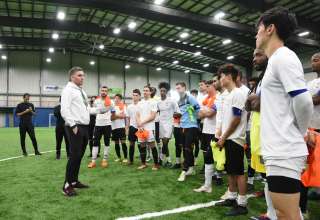 When I ask Jimmy Brennan at the Canadian Premier League’s Got Game open trials in Vaughan, Ont. if he is concerned about York 9’s membership numbers to date, a smile appears on his face. “No, we’re not concerned about memberships,” he says.

It is a disposition that sets York 9 apart from all the other teams in the league, and it is not the only thing that makes York 9 unique. Currently the only club in one of Canada’s big three markets, York 9 has consistently been doing their own thing. It is the only club that’s head coach is also a member of the ownership group; was also announced as the vice president of York Sports and Entertainment when the club launched earlier this year. The club’s home is York Region, a collection of nine different communities, contrasting the other club’s territories, which are much more tightly defined. And finally, there is York 9’s stadium solution. It will begin play in York Lions stadium, the only CanPL team to utilize a university stadium at launch —  and the only team to kickoff its inaugural season outside of the region for which it is named. York University’s campus stadium sits just inside the northern border of Toronto proper.

Brennan smiles at this, as well.

“I can stand on the York side of Steeles Avenue (the thoroughfare that acts as the border between Toronto and York Region) , throw a stone, and hit the stadium” says Brennan. Instead Brennan refers to how enthusiastic York University is to have the team at the university, how excited it is by the intimate atmosphere it believes the team will create there, and how York 9’s plans for a new stadium continue to take shape behind the scenes.

In fact, Brennan is bullish that all of these unique situations, which could be interpreted as potential barriers to York 9’s success, are well on their way to being surmounted. And it is by employing a solid and continuous ground game that Brennan believes his team is working towards that success.

“We are constantly out in the community. We are looking to get involved with all the local businesses. Every time there’s a festival, we have our staff there. The tents are all there and the cars that we’ve wrapped are all there. We are showing our community that the more we are out there and supporting our community, the more the community is going to support us. You can’t get people to support you if you don’t support them. And that’s been the biggest key for us.”

Immediately after launch, York 9 established relationships with all of the region’s soccer clubs. During the Got Game trials, many of the various club TDs and administrators have been invited and are attendance at the two-day event.. The team continues to engage the York Region business community, and believes that what it has done behind the scenes will translate into ticket sales that membership numbers fail to predict.

As for the head coaching decision, Brennan points to the ownership group . In discussions around the boardroom table, others in the ownership group thought it was quite simple. “Jimmy you’re from the region, you have your coaching badges, you’ve played over in Europe and in Canada, your family lives here … you’ve got to be the coach.” Brennan decided to take on the role. It is a role which brings a considerable amount of pressure, but in his own words “I thrive off of [pressure].”

There is little doubt that he will be feeling that pressure, now and in the foreseeable future. He is in a role which brings a considerable amount of pressure, but in his own words “I thrive off of [pressure].” And he punctuates it once again with a knowing smile.