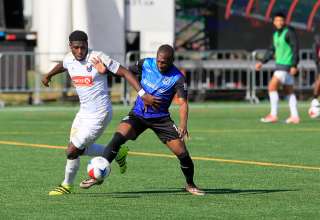 Even the rally rabbit couldn’t save FC Edmonton, this time.

Down 1-0 to North Carolina FC early in the first half of Sunday’s NASL match at Clarke Field, the Eddies had their good luck charm run onto the field; a grey rabbit interrupted the match. Now, history tells us that whenever the rabbit is seen, good things happen for the Eddies. That’s why the rabbit is on the jersey.

But the appearance of the furry grey talisman did not change the Eddies’ fortunes. They made it all too easy for the visitors, who would end up leaving Edmonton with an emphatic 3-0 win. NCFC won for the first time in franchise history at Clarke Field, and ended a five-year winless streak with an exclamation mark.

NCFC not only killed its infamous winless streak, but also made stew of the rabbit legend.

“There was not one passing mark on the team,” said Eddies coach Colin Miller after the shellacking. “The team was unrecognizable from the last four or five games.”

The Eddies’ five-game unbeaten streak came to a crashing halt.

Early in the match, it looked like the Clarke jinx might continue for NCFC. Two minutes in, and striker Brazilian striker Renan Gorne found a way to miss a wide-open net from three feet away.

But, instead of taking the miss as a sign of “here we go again,” NCFC kept pushing and pushing, often using two men on each wing to take away the outside of the park from the Eddies. And, at the 12-minute mark, NCFC took the lead on a fantastic strike from Nazmi Albadawi that swerved just inside the post.

Despite going into the teeth of a 30 km/h wind, NCFC keeper Brian Sylvestre pounded a goal kick into the Eddies half; Austin Da Luz got his head to the ball, sending it to Gorne at the top of the box. He cushioned the ball for Albadawi, who launched what will be an NASL goal of the year candidate. The ball started off on a trajectory to miss the net, then screwballed back inside the post.

The rabbit then made its entrance, and a crowd that had been silent since the opening kick-off got its voice; surely the Eddies would get off the canvas,  now!

But, in the 21st, Gorne was left absolutely open in the area to head home a corner, doubling the Carolina lead.

At half, Miller noted that the Eddies didn’t actually make a tackle till the 37th minute, but that the team had “mastered the art of hitting the near-post defender and getting hit on the counter.”

The Eddies did not show any new life in the second half. An NCFC corner kick ricocheted off FCE’s Tomi Ameobi, forcing keeper Tyson Farago into a diving stop to prevent the own goal.

“The only shot on goal we had was on our own goal,” fumed Miller.

Albadawi then sent a swerving shot off the bar,

But NCFC got its third late in the second half, after Eddies fullback Pedro Galvao gave the ball away to Steven Miller; the NCFC midfielder ran 30 yards down the field clear on goal, and finished the chance with a low shot that found the target.

NCFC coach Colin Clarke said that the win was especially sweet, as his team has come to Edmonton many times and gone home disappointed.

“I thought our guys were absolutely superb,” he said.