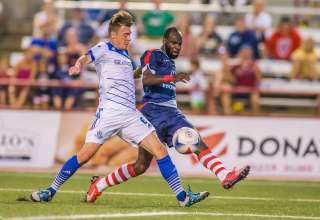 Before every game, FC Edmonton coach Colin Miller and his assistant, Jeff Paulus, go through a checklist of scenarios. What if Edmonton is leading? What if the team is trailing? Tied? How do they deal with a player that they think might not be able to play 90 minutes?

And from that, they develop a substitution and an in-game management plans. Miller said he learned a lot about planning for every possible scenario from Canadian national women’s team coach John Herdman, who is about as meticulous a game manager as you will find.

But the game plan for Saturday afternoon’s NASL championship semifinal game against the Indy Eleven should be even more multi-faceted. What if the game goes to 120 minutes? Penalties? A well-placed substitution could be the difference between heading to the final or heading home.

“I don’t want to put all the eggs in the one basket at the one point, but the game will determine how we will make our substitutions,” Miller said after an intense training session in the snow at Clarke Field Tuesday.” And, always, before a game we go through that process with Jeff and we talk about it. We call it the ‘what ifs.’ And I learned that really from John Herdman, who was very thorough and very precise in how he did things.”

The Eddies will play at Indy Saturday at 1 p.m. MT/3 p.m. ET. The game will broadcast on the giant Titan video screen, free of charge, as a part of a winter soccer festival at Edmonton’s Churchill Square.

“You think of everything, to be honest,” Miller said of his game plan. “All the chips are down, now. We’ll have to manage the game. Some players, their fitness levels may come into it at some point. Some of them haven’t played for a wee while.”

Miller had all hands on deck save for injured keeper Tyson Farago at Tuesday’s training session, but he knows that some of his players may need to have their minutes managed in Indy. A player like regular starting left back Adam Eckersley hasn’t seen a lot of minutes of late, so there will be questions of just how many minutes he can be pushed.

And if it comes to penalties? The team will practice spot kicks on Wednesday at Clarke and Friday at the training session in Indy.

“It’s a lottery,” said Miller. “I will ask players who want to take them, first of all. It’s up to them at that point. I remember Canada getting knocked out against Australia (1994 World Cup playoff), I was the fifth one to take a penalty and I didn’t get a chance to take it. We were already out at that stage. So I don’t want to tell a player to take a penalty if they’re not comfortable doing it. But, I am sure with this group of experienced players, there will be at least five volunteers who will jump up.”

And Miller said he expects one of the first to put up his hand will be his keeper, Matt VanOekel.

“I just don’t want the players to have any fear at all on Saturday,” said Miller. “That’s the most important thing. We are a good side. We’ve played well in Indy. We tied and lost there, but the loss I remember coming in at halftime and hearing some of their players saying that if we had taken our chances, we could have been 3-0 up at one point.”

Daryl Fordyce, Edmonton’s all time leading scorer, recalled winning the league and Cup with Northern Ireland’s Linfield four years ago. And he said when you go into a knockout game, a player has to be mentally prepared for a lot of different things.

“It’s  a game that can go to extra time, so as long as we keep the fitness levels up, it’s very important, you have to be prepared. I know some people practice penalties, some people don’t practice penalties, the best players in the world score them, the best players in the world miss them. I think it’s just a 50-50 chance. If the goalkeeper goes the right way, there’s  chance he’ll save it. If he doesn’t, you hit the target, it’s a goal. We’re just going to be prepared.”

Miller said the 2-1 win over Indy at Clarke in early October was dramatic because Ben Fisk scored the winner at the death, but the coach felt FCE dominated the match for about 65 of the 90 minutes.

“There won’t be any rocket science to how each team plays, we know each other so well,” Miller said. “I know how (Indy head coach Tim Hankinson) Tim’s team has played, he knows how our team have played. I think it will be two heavy hitters having a bash at each other.”

“They put in a lot of hard work,” said Fordyce. “They don’t stop going. They’re like us. They score a lot of goals in the last minute. They’ve got a lot of big players on their team, and they’ve got the quick, nimble players in the midfield. I’d say their hard work is their main positive from this year, along with ourselves. That’s why I believe it’s going to be a fantastic game.”

Of the three other teams in the NASL playoffs, Indy is the only one to have beaten FCE. The Eddies have beaten the Cosmos twice and drawn once, and drawn Rayo OKC all three times they’ve played.