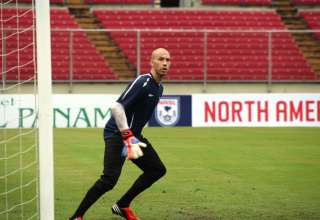 They were impossible to miss, as they were located in several spots surrounding the field. Advertising boards displaying “North American Soccer League” and “NASL.com,” along with the league’s famous star-studded soccer-ball logo, were very visible to anyone who viewed Tuesday’s Canada-Panama World Cup qualifier.

The signs were placed strategically alongside the pitch at Estadio Rommel Fernandez in Panama City. And the advertising buy was approved by NASL Commissioner David Downs.

“The opportunity arose for us to have the advertising in place for two special games,” said Downs. “Those were last night’s Canada-Panama match and Friday’s game between the United States and Jamaica. And we thought with the momentum the league has built since July, with the announcement of the New York Cosmos coming in and our new competitive format, we thought the field boards would be a fun way to help boost our brand at what we felt were the two premier soccer events of the week.

“It was an experiment to see if we could get our brand out there in a positive way. An, judging by the feedback, people noticed. And we may have the opportunity to do it again next month, when we are in our playoffs.”

Next season, the NASL will split the season into two distinct halves; the winner of the first half will host the winner of the second half in the Soccer Bowl. If the same team wins both halves, the club with the combined second-best record in the league will be the opponent.

As for the NASL and CONCACAF, remember that Traffic Sports, the Brazilian super agency, holds rights to a majority of CONCACAF qualifiers. Traffic also has major business interest in the NASL; not only does it own the Fort Lauderdale Strikers, it has interests in the Atlanta Silverbacks and the Carolina RailHawks, as those team search for new owners. The league also runs the Minnesota Stars, which means more Traffic money.

And, Enrique Sanz, the Traffic exec who was key in launching NASL 2.0, was named CONCACAF’s General Secretary on July 13.