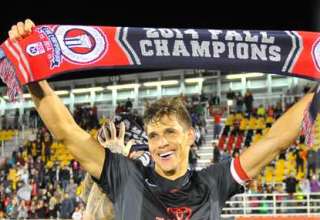 Adrian Cann may be known for a lot of things: But the Canadian centre back was never known for his scoring touch.

Until this week. For scoring the 93rd-minute game winner against the New York Cosmos that allowed his San Antonio Scorpions to clinch the fall-season title, Cann was named the NASL player of the week.

The Scorpions, coached by Canadian Alen Marcina, will go into the NASL post-season as the No. 2 seed and will host the Cosmos this coming weekend.

Cann and Marcina are former Vancouver Whitecaps teammates. Cann was released by Toronto FC in 2012 and, despite getting offers from San Antonio and the Chicago Fire in 2013, he decided to take a year off. But, after the 2013 season, Cann found out that San Antonio was still interested in bringing him on board, and he accepted Marcina’s challenge.

“Last year, I was supposed to come to San Antonio,” Cann said as part of an interview with Plastic Pitch (the full interview with Marcina and Cann can be found in the autumn issue, out now). “But I decided to take some time away from the game to reassess where I was at and then, eventually, a year went by. I was doing my own training at the time and Alen had reached out to me, we had played together in Vancouver, and said ‘would you consider coming to help the guys out?’ And I thought, yeah, I still had the urge to win a championship and eventually made the commitment.”