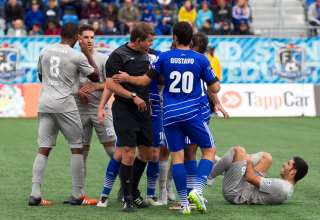 From the league: “The NASL has opened an investigation with respect to an allegation that racially abusive comments were made by one player to another player during the FC Edmonton vs. Puerto Rico FC game on August 28, 2016. Per League policy, no further comment will be made while the investigation is ongoing.”

From FC Edmonton: “FC Edmonton was notified, Monday morning, that Puerto Rico FC had filed a complaint this morning regarding an alleged incident that occurred between both clubs during their August 28 match at Clarke Field. FC Edmonton takes these allegations very seriously and is working with the North American Soccer League to investigate the incident. The club will make no further comments while the investigation is ongoing.”

After the final whistle, Nurse, a former FC Edmonton player, had to be shepherded off the field by PRFC back-up keeper David Meves and coach Adrian Whitbread. After the match, Nurse claimed that Di Biase had made a racist remark in Spanish. Nurse said it happened during the second-half scuffle that followed a controversial incident between PRFC’s Ramon Soria and FCE’s Sainey Nyassi, which saw Nyassi given a red card.

Di Biase does not speak English. The Argentine was signed by the Eddies near the close of the recent transfer window.

Di Biase started in the place of Shamit Shome, who was called up to the Canadian U-20 national team and wasn’t available for Sunday’s 0-0 draw.