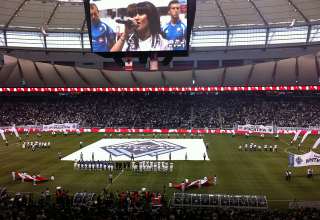 The director of Canada’s Women’s World Cup stadiums said Tuesday that the much-maligned turf at BC Place will “likely” be replaced before the tournament kicks off in June.

Don Hardman, the Chief Stadia Officer for the WWC, was in Edmonton to meet with venue managers from all six Women’s World Cup venues plus 18 training facilities.

Hardman said that negotiations are going well with BC Place’s owner, PavCo, to replace the surface.

“I think it will be replaced,” said Hardman.

He said taking out the old surface and putting in the new turf should take 12-20 days.

“Those are tight time frames, but it can be done.

In February, the World Rugby Sevens were awarded to Vancouver, with BC Place set to host the first of four tournaments in 2016. Rugby requires turf with longer blades than the current Polytan surface. So, when that tournament was confirmed, it was a done deal that new turf would be installed in time for that event. The remaining question was if the new surface would be laid down in time for the Women’s World Cup.

In 2014, national-team coaches who visited the sites ahead of the Women’s World Cup were critical of the BC Place surface.

“I think we have very good turf here in Edmonton and in other cities I hope it’s the same situation, because in Vancouver it’s a problem,” said Martina Voss-Tecklenburg, the former German national-team player who now coaches the Swiss team. “The turf in Vancouver, in my opinion, is not good enough for the World Cup.”

As well, Montreal’s Olympic stadium will get a new shock pad underneath its turf, a recommendation that came out of the hosting of the U-20 Women’s World Cup.

Edmonton will also be getting new turf. Commonwealth Stadium’s turf was deemed unacceptable because of the ghosting of football lines on the surface. The lifespan of the new Commonwealth surface is expected to be eight to 10 years, said Hardman.

Edmonton hosts Canada’s first two matches, including the tournament opener. With such “significant focus” on Commonwealth, Hardman said the decision to change the turf was made to ensure the players could enjoy “the best possible environment.”