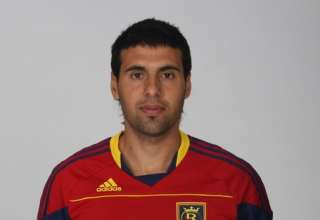 On a brisk but tolerable night at Rio Tinto Stadium in Sandy, Utah, Real Salt Lake was able to show what many had expected out of it coming into this CONCACAF Champions League Quarter-final matchup against the Columbus Crew.  Its 4-1 victory showed the dominance over their opponent that many had expected given the relative stability of the two lineups.

It was this stability, perhaps, that helped RSL to shine right out of the gate in this match.  And that early start was an important one according to Canadian International Will Johnson.  “I think it starts with the energy level,” said Johnson.  “Right off the bat, we just jumped all over them until we got our goal.  And then we stayed on top of them, and had a little bit of a letdown at the beginning of the second half.  Then we put the foot back on the gas and finished it off which was good.”

Johnson was part of an RSL midfield that had its way with the lacklustre Crew.  Johnson played well, as did the entire Salt Lake middle, but it was the duo of Toronto-born Andy Williams and Javier Morales who stole the show.  Willliams looked very energetic with a goal and two assists for the evening.  His first assist was a flick on pass to Morales, who set up Costa Rican striker Alvaro Saborio with a through ball in the 23rd minute.  Just 13 minutes later, it was Williams again slotting through a pass of his own that Morales put away for a 2-0 RSL advantage in the first half.

However, Johnson nearly had a spectacular goal in just the eighth minute.  He brought the ball down the left wing before cutting in to his right.  He continued unimpeded toward the middle of the pitch, before launching a rocket of a blast from over 30 yards out that hit the crossbar and bounded harmlessly downward and away from the goal mouth.

The shot earned praise at halftime from Commissioner Don Garber, who visited with the press.

“Will Johnson was an inch away from the Goal of the Year before the season starts,” exclaimed Garber before fielding a Q&A session with the media that had gathered.

Johnson himself was a little less enthusiastic about the attempt, “It would have been nicer if it had bounced off the post and in.”

In the second half the Crew came out with renewed life.  It pressured RSL for several minutes after the break, eventually getting a goal in the 49th minute from forward Andres Mendoza who took a shot from inside the penalty area against a harried RSL defense, and was able to beat ‘keeper Nick Rimando.

However, the home side regained their composure and it was once again Morales who put the ball in the back of the net in the 77th minute, this time off of a square ball from second half substitute Paulo Jr.

Not to be outdone by his midfield partner, Williams put the icing on the cake in the 95th minute with a tremendous free kick from 25 yards out.  The ball went over the wall, and then dipped, bending toward the left upright and easily beating Ray Burse Jr. for the fourth and final goal for RSL.

“He was incredible tonight,” said Coach Jason Kreis of Williams play on the evening.  “Very inspired performance by him.”

“It’s a positive step for this club,” said Johnson of his team advancing.  “It was a fantastic night.  We’ll enjoy tonight, and look forward to the semifinals.”