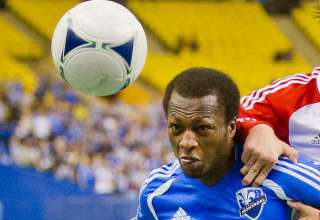 Montreal coach, Jesse Marsch, fielded a reworked starting XI to begin the game against Toronto FC. The decisions paid off as the Impact got off to a good start, grabbed a lead in the early going and held it — despite giving up a goal in the late going — to put its historic first MLS win into the books.

Left sitting to begin the game were captain Davy Arnaud, local midfielder Patrice Bernier as well as Justin Mapp, who performed in all five games played so far this season. Sinisa Ubiparipovic started, getting his first minutes of action this season and coming out for map in the 73rd minute. Italian forward Bernardo Corradi wore the captain’s armband.

“It’s a big moment and a big win for the club, for the fans, for the city and for the players,” declared coach Marsch in his post-game comments before nuancing his positivity. “The reality is that the work is just getting started. I think we’re all pleased and happy and excited but I think our players are so well grounded that they understand that it’s about the whole process and pushing things along. I’m happy for everyone who is connected with this club and now let’s continue to perform.” he continued.

The afternoon’s drama began early. In the fifth minute, Donovan Ricketts was flat on his back following a collision with teammate and compatriot Shavar Thomas. The Jamaican goalkeeper was vertical within a couple minutes and resumed play.

The next moment of excitement came in the 18th minute when Lamar Neagle stripped Terry Dunfield and slipped a pass to Ubiparipovic, who easily put the ball into the net to the left of a diving Milos Kocic to give the Impact the lead, one that it would take into the second half for the first time this season after dominating the play, holding possession of the ball for just under two thirds of the opening half and completing just under 80 per cent of its passes..

In the 28th minute Impact forward, Sanna Nyassi — dangerous all half on the left wing and third in MLS so far this season with eight shots on goal, — dribbled in from midfield, unleashed a rising shot from inside the penalty area that struck Kocic in the midsection.

Ricketts was involved in a second collision in the 37th minute of play, impacting forward Danny Koevermans when he came out to play a shot from the boot of Dunfield, one of three Canadians appearing in Toronto red this afternoon.

The second half provided as many or more scoring chances as the first, with both teams coming close in the early minutes.

Toronto had its chances despite having only 10 men on the field, in fact showing more spunk down a man than playing with a full complement. With Ricketts out of position a Koevermans shot was stopped by Montreal defender Tyson Wahl on the goal line while moments later a Thomas reverse kick from inside the goal area denied the shorthanded visitors once again after the original shot bounced off Zarek Valentin.

In the 81st, Andrew Wenger put the Impact ahead by two when he took a pass from Mapp (who had come in as a sub), dribbled in to beat defender Ty Harden and found the mesh behind Kocic, sending all but the 1,000 visiting members of the Red Army among the 23,120 in attendance into ecstasy with his first professional goal.

“It feels good to get it out of the way,” he said. “To get the monkey off your back. It just feels good to win. We finally put together a good game.” The rookie continued before saying that he was headed back to Duke University before returning to the Impact next week.

“I have classes the next two days. If anyone wants to write my term papers we can arrange something,” he chuckled.

With only a couple minutes left in regulation time Toronto FC got on the board, a Koevermans header finding the Montreal mesh to prevent the clean sheet.

THROW-INS – While today’s tilt was the first MLS game between the Impact and Toronto FC, the teams have met six times in the past with the Reds holding a 5-0-1 advantage in their head-to-head history.

• Toronto went into the match in the throes of a 202-minute scoring drought that began with a Ryan Johnson marker scored against Seattle in their season opener, extending it to 290 before getting on the score sheet in the 88th minute.

• At the start of play the Montreal Impact lead the MLS for fouls committed with 80 so far this season. Donovan Ricketts’ 17 saves are more than any other keeper has made so far while Davy Arnaud has been fouled 15 times, also tops in the league.

•Toronto started three Canadians this afternoon, defender Ashtone Morgan and midfielders Julian de Guzman and Terry Dunfield. The Montreal side featured no players from its home and native land.

• Toronto FC has lost all four matches to start the season. The last time that happened was 2007, the team’s expansion year.