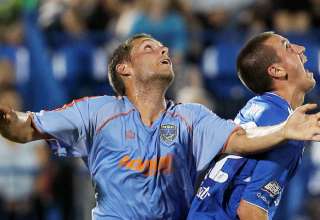 Only four of the dozen men who took to the pitch dressed in Impact blue for the team’s 2-0 triumph Saturday against the visiting NSC Minnesota Stars were participants in Montreal’s season opener in April.

One was a backup keeper and six have been added since the team’s media guide went to press.

Dozen, not starting 11? Well, the last was a stranger not only to the 12,237 fans in the stands, but also to the rest of the players. Once the interloper was removed from the pitch by security personnel after a pursuit that proved he was definitely not game-ready, the crowd assumed its rightful and traditional role as the 12th player and things got underway.

Needing to pick up seven points in as many games on sixth-place FC Edmonton, who go up against the cellar-dwelling Atlanta Silverbacks Sunday, Montreal began applying pressure from the first moments of play, their chances coming one after another in the early going as newcomer Mircea Ilcu took a Ryan Pore pass and drove it towards the Minnesota net only to have keeper Joe Warren dive to his right and deflect the ball over his crossbar.

Eduardo Sebrango, the most recent NASL offensive player of the week, was set up by Sinisa Ubiparipovic in the ninth minute, going in on the Minny net but chipped his shot over the target. The 38-year-old followed up with another chance in the 16th minute, this one set up by Ryan Pore. Dribbling up the left side Sebrango sent his shot across the goal mouth, rolling it just wide of the right hand upright.

Two minutes later Ubiparipovic had a chance of his own but sent his drive wide to the right of the visitors’ goal.

With the Impact controlling the play and dominating possession time, Minnesota’s chances were few and far between. Montreal keeper Evan Bush, who was not credited with a single save, did not have to touch the ball until the 27th minute, when he picked up an inoffensive slow roller and relaunched his team’s attack.

Two minutes later Minny’s top scorer, Simone Bracalello, who scored twice the last time these teams met, sent the ball sailing harmlessly over Bush’s net. Defender Justin Davis missed shortly afterwards to the left but, for the most part, the visiting side was preoccupied with trying to turn aside an Impact offence that has turned potent in recent weeks.

The teams were into first-half extra time when Pore scored his first of the year, on a pass from Ilcu to send the Impact to their dressing room up one goal.

“It felt great,” Pore declared after the match. “Mircea caught me with a great pass and I was able to complete on it.”

Coming out the second half, a re-energized Stars team took the game to the Impact with Bush seeing more action early on than he did in the first 45 as his opponents were awarded three corner kicks in the first six minutes. A Minny free kick in the 66th minute was easily caught by the Impact goaltender as his team sagged, the control of the game shifting to the Stars as a suddenly listless Montreal side tried to keep up and counter. Hoping to reinvigorate his charges, Impact coach Nick De Santis substituted Leonardo Di Lorenzo for Ilcu in the 63rd minute and sent on Mignane Diouf for Pore in the 70th.

Despite the fresh Montreal legs, Minnesota maintained its control of the match. Bracalello spun around a Montreal defender and sent his shot into Bush’s arms in the 78th minute but the Stars’ other opportunities did not come to fruition as the defence solidified in front of Bush, who ended the afternoon with his fifth clean sheet of the season.

Bush was quick to share the credit for the shutout with his teammates.

“The defence really pulled together today and the forwards are starting to help out as well by getting that first goal, which is very important in soccer.”

Speedy Diouf lifted the crowd from its torpor in the 81st minute with a charge down the right sideline but was unable to get a shot off— he allowed the ball to get too far ahead of him and it rolled harmlessly into Warren’s arms.

Two minutes later Diouf once again streaked up the right side and sent a cross to onrushing Eddy Sebrango, who netted his sixth of the season to double the home team’s lead.

From then until the end of play, it was simply a matter of hanging on for the Impact. Newcomer Miguel Montano, on loan from the Seattle Sounders, came on for Sebrango in the 88th minute and wasted no time endearing himself to the fans in attendance. Moments after making his Montreal debut, he sprung Diouf who took a low shot that forced Warren into a diving shot.

The Stars’ last attempt on the Montreal net was a long, low try that defender Luke Kreamalmeyer stopped as he slid in front of the goal.

Coach De Santis was smiling when he met the media after the match, an expression that has not often crossed his countenance during this season’s post-game chats.

“I’m very pleased with the game today. We dictated the play overall and even in the moments when Minnesota was able to get some momentum they suffered together, they concentrated and they didn’t give anything away,” he said. “The guys are so concentrated on the job they have to do that it is reflected in team unity and in a sense of confidence.”

The Impact’s five-game home stand saw it pick up 10 of the 15 possible points, an impressive performance compared to their outcomes over the early part of the schedule but the team is not out of the woods yet.

“We’re still in a tough spot,” he ventured.” We have to play with heart, especially on the road. Technique is fine but you need to play with a lot of heart as well.”

Four points out of playoff consideration pending the outcome of tomorrow’s Edmonton-Atlanta match, the Impact’s next game is against the Stars in Minnesota next Saturday.

Asked whether he’d pop for the Silverbacks’ suds if they won against the Eddies, De Santis joked that he may just buy the first couple of rounds.

THROW-INS: Held out of the starting 11 for the second game in a row, Impact defender Philippe Billy’s next appearance will mark the 50th time he has hit the pitch as a member of the Montreal Impact.

• Miguel Montano, on loan from the MLS Seattle Sounders for the rest of the schedule is just the most recent import from the Pacific Northwest, joining Ryan Pore and Cameron Knowles.

• The only Canadian listed on the Minnesota roster, Ontario native Gino Mauro who signed with the Stars in July, has not yet appeared with the big club, spending his time with the Stars reserve squad so far this season.