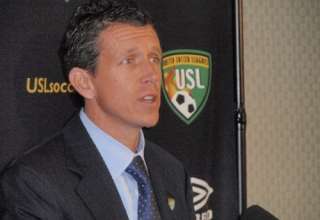 USL President Tim Holt said it was a “seamless transition” to bring the Vancouver Whitecaps and Montreal Impact back into the USL-Pro fold.

Holt and MLS executive vice-president Todd Durbin spoke to media Thursday to give more details about what they called the “groundbreaking” MLS-USL partnership. Under the new deal, MLS teams have three options on how they want to proceed with their reserve plans.

Beginning this season, teams can either affiliate with an existing USL Pro club (four U.S. MLS teams have already gone this route) start their own teams in USL Pro or remain in the reserve league and play occasional interlocking matches with USL Pro clubs.

Eighteen of 19 MLS teams are taking part in 2013. Chivas USA is not collaborating with USL Pro this year.

That means Montreal and Vancouver are on board. Remember that, after the 2009 USL season, the Whitecaps and Impact were at the forefront of a renegade owners group that formed the NASL, which is now the recognized second division in North America. And, sources have indicated that both teams had previously tried to move their reserve teams into NASL.

But Holt said it wasn’t difficult to bring the Whitecaps and Impact back into the fold.

“We’ve maintained positive relationships with them… The Whitecaps had a W-League team for a number of years.”

But Holt and Durbin were caught off-guard when they learned that Canadian Soccer President Victor Montagliani, in protecting the vision for domestic lower divisions, said on Wednesday that if USL-Pro/MLS affiliates in Canada were to be launched, they wouldn’t get official sanctions. (SEE THAT STORY HERE) Montagliani did not say the CSA would block USL teams from existing on Canadian soil, but said they would be seen as the internal affairs of the already-existing and sanctioned MLS teams.

Holt said the USL Pro was willing to work with the “respective associations” to help grow the league in the U.S. and, if possible, in Canada, too.

Throughout the telephone conference, both Durbin and Holt referred to the development of soccer in “this” country (as in, the United States). It might just be an error of omission — after all, these are Americans speaking to a media panel which is made up mostly of, well, Americans. And, USL-Pro has no Canadian clubs at this time, even though the youth and women’s divisions administered by the USL certainly do.

As well, when it comes to language, both men were careful to refer to USL as the “lower” division, not the “third division,” which is how USL-Pro is officially recognized in America — and, unless something changes in the CSA, won’t be recognized at all in Canada.

Durbin said that there were no plans to include the second-division NASL in the ladder at this time.

“I would leave that to conversations with the NASL,” he said.

And Holt was eventually asked if USL would eventually push to become recognized as Division-2 in the United States. Remember that, to be Div.-2, an owner must meet certain net-worth requirements, and teams are required to post $750,000 bonds. As well, 75 per cent of the teams must play in markets that have populations of more than 750,000.

“We’re not consumed by what our divisional designation is,” said Holt.