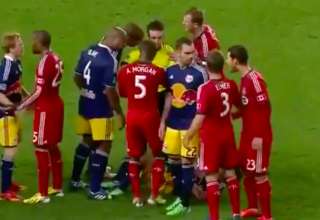 On Friday, the committee slapped Osorio for a two game suspension for kicking a ball off the head of New York Red Bulls defender Kosuke Kimura during last Saturday’s match in New Jersey, which the Reds lost by a 2-0 count.

In the second half, just after Kimura hit the turf and the whistle was blown for a foul, Osorio kicked a ball that was next to the Red Bulls’ fullback. The ball ricocheted off Kimura’s head and a shoving match ensued between the two teams.

The referee in charge of the match deemed that Osorio’s late kick didn’t warrant even a yellow card. The Disciplinary Committee disagreed, stating that it was a case of “violent conduct” that warranted a fine and a two-game ban.

The question is, did Osorio have time to pull out of his challenge? It’s one of those situations that’s actually muddied by the use of instant replay. By slowing it down in replay, it looks as if Osorio has more time to pull out of the challenge than he actually did — and the play looks more malicious in nature when it slows down.

In actuality, there might be at most a second and a half that went by between the time Kimura went down, the ensuing whistle, and the kick. Could an average human being put together an intent-to-injure thought in that short of a time-span? That’s the question.

Dax McCarty, the Red Bulls midfielder who set up his team’s opening goal, was also fined for his part in the post-tackle shoving match. Red Bulls’ defender Jamison Olave was fined for a separate incident.

As well, MLS has ruled that Montreal Impact Sporting Director Nick De Santis won’t be around for this weekend’s home date to the Vancouver Whitecaps. MLS slapped him with a one-game ban “for continued aggressive, confrontational, and irresponsible behavior toward the match officials following the Sept. 14 game against the Columbus Crew.”

The video of the Osorio incident is below.