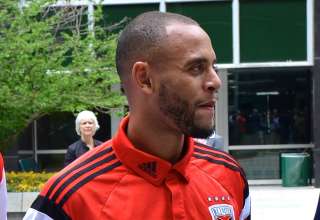 More Canadians are working in MLS this season than in 2012 — but those new jobs aren’t on the high-pay end of the scale.

The MLS Players’ Union released its salary update Monday, the day when the layers of secrecy are peeled away from the contracts that have been signed by the league’s players.

And what have we learned? That there are five Canadian players making US$35,125 this season, while eight more are on the books for base salaries of $46,500 each. Of those, only DC United’s Kyle Porter and TFC’s Kyle Bekker were able to squeeze some extra dough out of their deals to get a little bit more than their base contracts.

With Julian de Guzman now playing out the string with relegated Bundesliga 2. side Jahn Regensburg, he gives up his No. 1 spot on the Canadian rich list. Dwayne De Rosario, with a base number of $600,000, now takes over as the highest paid Canadian in MLS.

Another interesting tidbit: Ante Jazic, the Canadian fullback who hasn’t surfaced at Chivas USA this season, is still on the books of the Los Angeles club.

And, while we are discussing lost souls, the Players’ Union has an unattached Matt Stinson still on the MLS books for $46,500 this season. Stinson was cut by TFC earlier this season, but the Canadian midfielder is still on the league’s books, according to the MLSPU numbers.

Below, we present the Canadian rich list. The first number is the player’s base salary, and the second is the player’s full compensation (including bonuses, etc.) for 2013.

For purposes of never having declared for the national team, we have excluded Columbus forward Ethan Finlay (whose dad is Canadian) and FC Dallas defender Ugo Ihemelu, who grew up in Winnipeg. We have included Montreal’s Wandrille Lefevre, who was born in France but is considered a domestic player in MLS as he’s spent years in Quebec. We have also counted TFC’s Ashton Bennett as a domestic even though he’s foreign-born and hasn’t been capped by the senior national team.

And we put Ghana-born Gershon Koffie on the list. The Whicecap now has his Canadian residency and has hinted he’d like to play for Canada down the road, though an appeal would need to be made to FIFA on behalf of the midfielder as he wasn’t a Canadian citizen when he appeared as a youth for Ghana.