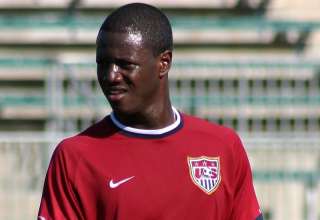 Update: As of Aug. 17, MLS announced that Eddie Johnson had ‘reneged’ on verbal agreement to join MLS.
Eddie Johnson’s mark on the history of Toronto FC can never be erased.

The American striker, who the league announced Tuesday will be repatriated to MLS after failing to make his mark in Europe, scored the first-ever league goal at BMO Field.

After losing three in a row on the road, Toronto FC opened BMO Field on April 28, 2007 against the Kansas City Wizards, a team the Reds had lost to 3-0 at Arrowhead Stadium just three days before.

Kansas City won the home opener by a 1-0 count on a goal from Johnson — on an effort the deflected off a TFC defender. With that goal, Johnson made a mark in the history of soccer in Toronto.

Before the goal, Johnson had three point-blank chances on then-TFC keeper Greg Sutton, who denied the striker on all of them. Anyone who was at BMO Field that afternoon will recall that Sutton was the best player on the pitch.

Johnson will re-enter MLS through the allocation order. Toronto FC is third on the list, and there is a strong possibility Johnson could fall to the Reds. Even if TFC didn’t want to keep Johnson, it could burn the pick and then try to make a deal.

He scored 41 times for FC Dallas and the Wizards before he went to Fulham, where he failed to impress in the English Premier League. But Johnson’s stock has fallen badly since the days when he led the Wizards’ attack. He struggled at Preston North End, his last stop in English pro soccer.

The Johnson announcement came at the same time as the league announced a tweak to the Designated Player rule. Under the rule, players und 20 and under will only constitute a US$150,000 cap hit. Players in the 21-23 age range will be a $200,000 hit each.

But the question is, how many MLS general managers will be able to get their hands on a teenager who is deserving of a Designated Player tag? Are MLS teams going to start raiding the Barcelona and Arsenal academies, dangling million-dollar contracts?

On second thought, it would be kind of cool.

Still, on the marketing end, it’s hard to sell fans on a DP that isn’t a well-known commodity in world soccer. If you spend big bucks on a teen, and some other U-20 prospect that came up through an MLS academy is outperforming him, you’ve got egg on your face.

But the rule change has to make you wonder if there’s a GM who is ready to pull the trigger on a young DP. Remember that MLS has a history of making rule changes ahead of a team making a significant move or moves that was made possible by those changes.

Think back to 2010, as both Thierry Henry and Rafa Marquez were both linked with New York — which already had DP Juan Pablo Angel on its books — the Designated Player rule was changed, allowing for rosters to have three DPs each.