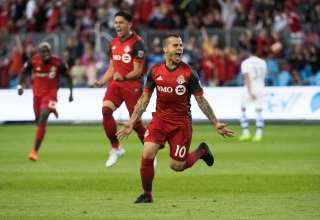 As the new general manager of MLS’s long-promised and finally delivered Canadian head office, he’s got an awfully big job. On Monday, the league announced that Moratoria would run the league’s Canadian office, and would answer to Soccer United Marketing.

So, the new league office will be an extension of the marketing arm, and right now there’s no sign that that it will have any hand in the competitive aspects of the league — that is, the soccer itself.

Still, there is work for Moratorio to do. Frankly,  the league has done a job so poor in selling the game to people north of the border, that calling its sell job “abysmal” would be a compliment.

This is a league that has fans in Canada despite itself, not because of any outreach work it has done north of the border.

On the marketing side, over the years we’ve seen contests and promotions run by the league that aren’t valid in Canada. We see teams in Canada advertising products that aren’t available in Canada. (When was the last time any of you saw a Bimbo baked product in a supermarket, or drank a can of Sierra Mist?)

But, where MLS has truly stumbled in Canada is in making itself a national concern. Basically, in this country, interest in the league is restricted to the three metro areas that have teams. The three Canadian MLS clubs have virtually no presence in the rest of Canada. Finding a Toronto FC shirt or a Whitecaps scarf at West Edmonton Mall… well you can’t do that. (But you can find jerseys for all the NFL teams and pretty well every alternate cap used in Major League Baseball). To sports fans outside of the three MLS cities, “Giovinco” sounds like the latest pizza offering from Famoso.

Last season, MLS thought it had its breakthrough; more than a million viewers tuned in to see Montreal face Toronto FC in the playoffs, then see TFC lose MLS Cup.

Did those viewers come back to follow the 2017 regular season? For the most part, no. According to the National Post, TSN’s ratings for MLS are up this season. Toronto FC is averaging 93,000 viewers a game, while the Whitecaps are at 86,000 and Montreal is at 80,000.

They are up, but they are still terrible.

And, more troubling, is that the wide majority of Canadians who gave MLS a shot during last year’s playoffs decided to NOT come back. Maybe it was the fact that the 2016 MLS Cup was one of the most awful games of soccer ever played – a game that gave every person who says “MLS is not nearly world class and that’s why I don’t watch it” the ammo needed to post on a million message boards. Maybe it was the lack of follow-up promotion from MLS and its Canadian teams.

But, if the playoffs and MLS Cup spiked to over a million viewers, and then the audiences are back under 100,000 per game in 2017, that tells us that MORE THAN 90 PER CENT of those who tuned in to MLS for the post-season didn’t come back. That’s a stunning rate of non-retention. I mean, that’s the-entire-marketing-department-is-fired kinda stuff.

And what does that say to potential sponsors? That there’s no loyalty to MLS outside of a relatively small group of core fans in the three largest Canadian metros.

That’s something that gets lost when you’re sitting in BMO Field or at BC Place; that, outside of this group of very passionate fans, there isn’t an army of fans who are following that closely.

It took me leaving Toronto, where I covered Toronto FC for Sun Media from 2007-10, to make me understand how little the rest of the country pays attention to MLS. When you’re going to BMO Field on a regular basis, you’re caught in the tunnel. Great atmosphere, sellout crowds. What you don’t see is how little of this spills over to the casual sports fan. When I left Toronto, I came to understand just how insular and hyper-local MLS interest is.

If anyone covering the TFC beat wants to see how little the sport registers outside of the GTA, please feel free to visit me in Edmonton. I’ll buy the drinks and food. We’ll go from sports bar to sports bar and ask them to put on the TFC game. Or the Whitecaps game. We can do this in Saskatoon. Or Winnipeg. I hope you like curling, because I think that’s what we’ll end up watching.

Now compare MLS’s failure to establish a national reach to the Blue Jays, who, despite being long eliminated from the playoff race in 2017, were drawing more than 750,000 viewers — according to Numeris — to watch each meaningless September game.

Now, the Blue Jays have been around for a lot longer than MLS. They have a head start. But this is a team with a front office that understands how to make itself a national concern, something the three Canadian MLS teams  — and the league as a whole — have failed to do. While MLS is anonymous outside the three Canadian markets in which it has teams, the Jays go to Seattle and sell out the stadium. The annual Seattle pilgrimage has become one of the great traditions in Canadian sport — and it’s not even held on Canadian soil. Tens of thousands of Canadians descending on an American city so they can watch… the Blue Jays. Or, look at how Target Field turns blue when Toronto visits the Twins. These happen because of the die-hard Jays fans that can be found in Manitoba, Saskatchewan, Alberta and British Columbia. Baseball is a national concern.

And it needs to be noted that the Jays do regular outreach throughout Canada, including player visits, to keep their brand top of mind. I don’t know if anyone in MLS’s head office could find Calgary or Halifax on a map.

Now, it’s not just the continuing interest in baseball that gives MLS problems. In the spring and fall, hockey is an issue. And it will be a bigger issue in the coming years. There’s been a surge in interest because the three youngest stars in hockey — Connor McDavid, Patrik Laine and Auston Matthews — all play in Canadian markets. Canadian teams, as a whole, or on the rise. For Sportsnet and CBC, playoff ratings in 2016 were nearly double that of 2015.

And then there’s the issue of the Canadian Premier League; a league that will try to be a national concern, that looks to make soccer a coast-to-coast sport. With the push for CanPL already gaining momentum, is MLS already too late in opening a marketing arm in Canada?